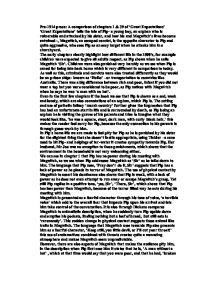 A comparison of chapters 1 &amp; 39 of Great Expectations

Pre-1914 prose: A comparison of chapters 1 & 39 of 'Great Expectations' 'Great Expectations' tells the tale of Pip- a young boy, an orphan who is vulnerable and attacked by his sister, and how his and Magwitch's lives become entwined -, Magwitch, an escaped convict, is the opposite character to Pip and quite aggressive, who sees Pip as an easy target when he attacks him in a churchyard. The early chapters clearly highlight how different life in the 1800's, for example children were expected to give all adults respect, as Pip shows when he calls Magwitch 'Sir'. Children were also punished very harshly as we see when Pip is caned for being late back home which is very different in comparison to today. As well as this, criminals and convicts were also treated differently as they would be on prison ships- known as 'Hulks' -or transportation to countries like Australia. There was a big difference between rich and poor, infact if you did not wear a top hat you were considered to be poor, as Pip notices with Magwitch when he says he was 'a man with no hat'. Even in the first few chapters if the book we see that Pip is shown as a sad, weak and lonely, which are also connotations of an orphan, which Pip is. The setting and use of pathetic fallacy 'marsh country' further gives the impression that Pip has had an unfortunate start in life and ...read more.

The colours that are used suggest a sunset, but Dickens uses this to suggest two things: 'horizontal line, not nearly so broad nor yet so black' , this adds to the use of pathetic fallacy and to also show how bleak Pip's life seems to be. The sunset in chapter 1 describes, 'a row of long angry red lines and dense black lines intermixed.' this is cleverly done by Dickens as it foreshows the anger and fury of Mrs. Joe waiting for Pip upon his arrival at his house. I chapter 39 the quotes used by Dickens to described the weather, 'so furious had been the gusts' and 'violent blasts of rain' remind us of the weather in the marshes in chapter 1. Dickens cleverly uses the phrase, 'like discharges of a cannon' to describe the wind, which is a reminder of chapter 1 when Magwitch appears and how we learn that a cannon was fired if a convict escapes, this also foreshows the return of him further on in chapter 39 when he visits Pip. Dickens also uses these descriptive phrases for both chapters to again foreshadow the arrival of Magwitch. The change in setting to London is contrast to chapter 1as London is associated with money, wealth , power and at the time eccentric manners and behaviour. However chapter 1 describes quite a baron, bleak marshland and an old rickety houses, which shows how Pip's surroundings, along with his lifestyle, has changed dramatically. ...read more.

In chapter 39, Pip shows how he has power over Magwitch as he is upper class and feels superior to him, he also uses imperatives, '"stay!" Said I, "keep off!"' this shows Magwitch is lower than Pip as he talks down to him, which contrasts to chapter 1 where Pip talks politely to Magwitch. However, Magwitch has the upper hand and manages to turn it around so he once again has the power over Pip, using the information about him being the benefactor to his advantage, 'well, you see it wos me, and single-handed.' This new benefactor startles Pip, as he always thought that Miss Havashim was providing the money so that he could impress Estella. Magwitch has power over Pip through the way he refers to him as his, 'owner' and that he, 'created him' this language used shows that Magwitch -through paying for Pip not to work- is responsible for his good life and the way Pip has turned out a gentleman, Magwitch also refers to Pip as his, 'second father' implying he cares about Pip and his welfare, but that he is in control as he made Pip into who he is today. In conclusion, 'Great Expectations' has a cleverly thought out story line and personalities that keep you guessing as the power flows though the characters. I particularly like how the moral has such a big part of the story line, with it being: don't lose yourself in money, there is an almost constant reminder throughout the book. ...read more.