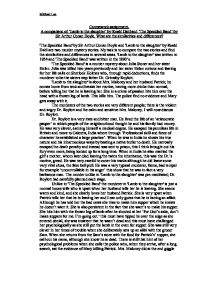 A comparison of 'Lamb to the slaughter' by Roald Dahl and 'The Speckled Band' by Sir Arthur Conan Doyle. What are the similarities and differences?

Coursework assignment- A comparison of 'Lamb to the slaughter' by Roald Dahl and 'The Speckled Band' by Sir Arthur Conan Doyle. What are the similarities and differences? 'The Speckled Band' by Sir Arthur Conan Doyle and 'Lamb to the slaughter' by Roald Dahl are two murder mystery stories. My task is to compare the two stories and find the similarities and differences in several areas. 'Lamb to the slaughter' was written in 1954 and 'The Speckled Band' was written in the 1890's. 'The Speckled Band' is a murder mystery about Julia Stoner and her sister Helen. Julia was killed two years previously and her sister Helen curious and fearing for her life calls on Sherlock Holmes who, through rapid deductions, finds the murderer to be the sisters step father Dr. Grimsby Roylott. 'Lamb to the slaughter' is about Mrs. Maloney and her husband Patrick; he comes home from wok and breaks her routine, having more drinks than normal, before telling her that he is leaving her. She in a crime of passion hits him over the head with a frozen leg of lamb. This kills him. The police find no evidence and Mary gets away with it. The murderers of the two stories are very different people; there is the violent and angry Dr. Roylott and the calm and sensitive Mrs. Maloney. I will now discuss Dr. ...read more.

Watson', who Sherlock thinks a lot of, whereas Noonan works with a full team of detectives and police persons. Noonan has worked all day before he takes a drink from Mrs. Maloney, 'Just a drop to keep him going.' Holmes is a man of quite considerable money, 'sharing rooms as bachelors', unlike, maybe, Noonan who is just a normal police detective and on a little wage. Noonan didn't solve his mystery unlike Holmes who solved his with quite little difficulty. This could mean that Sherlock is a better detective or that Mary is a better murderer, in that she can cover her tracks better. The victims in both stories were related to the murderers, in 'Lamb to the slaughter' the victim was Patrick Maloney the husband of his murderer Mary Maloney, and in 'The Speckled Band' Julia and Helen Stoner were the step daughters of their murderer, Dr. Grimsby Roylott. The victims were very different people; Julia and Helen were sisters who had a very good life until their stepfather decided to be greedy. They were very close and when Julia died it affected Helen badly. She was very upset because her sister was to marry before she died, as was she when she visited Holmes. Helen is very clever and has a good memory as she remembered that her sister had noticed whistling noises out side. Patrick is a very normal man who was very successful at his job as a police detective. ...read more.

The language of the two stories gives us evidence as to when they were set. The language of 'The Speckled Band' is very old and a lot of the words are unused in today's society for example, 'defray', 'dog-cart' and 'would fain'. Other words such as 'Squire' not only show us the time of the play but it also indicates the social background of the Roylott's. The sentences are longer and more complex as are the words. The language used affects the way we look at the story in that it is more difficult to understand, but very old fashioned. 'Lamb to the slaughter' is very different, in-fact quite the opposite. All the words are used commonly in our society and the sentences and words are shorter and much easier to understand. This could show that people have become lazier and adapted the English language to suit us. In conclusion I have found that both Roald Dahl and Sir Arthur Conan Doyle have achieved their target of creating riveting and exciting murder mysteries. I think that the better detective was Sherlock Holmes and that the best and most careful murderer was Dr. Grimsby Roylott because although he got caught his murder was devised and carefully planned out to succeed but unfortunately divine intervention got in the way. The overall better story was 'The Speckled Band' because although 'Lamb to the slaughter' was very exciting and gripping 'The Speckled Band' was written better. Sir Arthur Conan Doyle include red herrings and this just added to the excitement. Michael Lee ...read more.