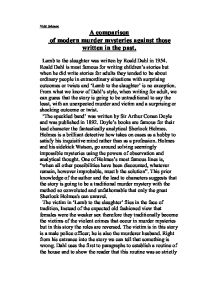 A comparison of modern murder mysteries against those written in the past.

Vicki Johnson A comparison of modern murder mysteries against those written in the past. Lamb to the slaughter was written by Roald Dahl in 1954. Roald Dahl is most famous for writing children's stories but when he did write stories for adults they tended to be about ordinary people in extraordinary situations with surprising outcomes or twists and 'Lamb to the slaughter' is no exception. From what we know of Dahl's style, when writing for adult, we can guess that the story is going to be untraditional to say the least, with an unexpected murder and victim and a surprising or shocking outcome or twist. 'The speckled band' was written by Sir Arthur Conan Doyle and was published in 1892. Doyle's books are famous for their lead character the fantastically analytical Sherlock Holmes. Holmes is a brilliant detective how takes on cases as a hobby to satisfy his inquisitive mind rather than as a profession. Holmes and his sidekick Watson, go around solving seemingly impossible mysteries using the powers of observation and analytical thought. One of Holmes's most famous lines is, "when all other possibilities have been discounted, whatever remain, however improbable, must b the solution". This prior knowledge of the author and the lead to characters suggests that the story is going to be a traditional murder mystery with the method so convoluted and unfathomable that only the great Sherlock Holmes's can unravel. ...read more.

Mary is seemingly unfazed about being charged with murder and it is in the end her unborn child that prompts her to hide her guilt. Her clear thinking is also very worrying after all she has just killed her husband with a part of there dinner with out even thinking, surely she should be hysterical but instead she is already planning her alibi. All this evidence suggest that Mary Malone has past beyond the reaches of sanity, whether her madness is temporary or permanent we do not know, what we do know is that Mary Malone is not a well women whose heavily pregnant and madly in love with her husband whose just ask her for a divorce, asking if they can keep the arrangements quiet so it wont effect his job. The reader is made to feel sorry for the woman whose life just shattered before her eyes and lashed out in a moment of pure rage and fear. Also we sympathises with a mother unwilling to admit to her crime for fear it will threaten her child. (Although I'm not sure living with a murderous psychopathic mother is a great start for it any way) But murder under any circumstance is not acceptable even if the circumstances were extreme to say the least. ...read more.

The ending feels unfinished there is no cut and dried justice nor is there a sense of completion. It evokes a feeling of unsure ness in the reader; after all do we really want this woman and child to be locked up? 'Lamb...' main good point is the point it is so thought provoking. I enjoyed both of the stories for different reasons. 'Lamb...' untraditional storyline and ironic twist make it very interesting. Also it is very compelling to watch how an ordinary women can become so out of touch with reality that she will commit murderer to keep her imagined reality from shattering. Despite this however my favourite out of the two books must be 'The Speckled Band'. All of the Sherlock Holmes series are amazing as you try to deduct from the evidence the truth. Also the hero himself manages to fulfil in us a need to find something, or someone, superior. People will always read murder mysteries as the public love to be confounded but there is another reason as well. People will always be interested in the darker side of human nature. What could drive someone to kill? By reading murder mysteries we can get a glimpse into the minds of the people that could take another persons life. These stories help us assess ourselves, to find out what could push us far enough that we could destroy another human being? ...read more.