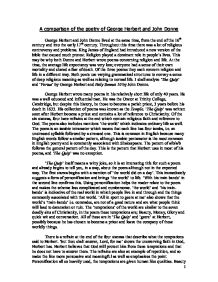 A comparison of the poetry of George Herbert and John Donne

A comparison of the poetry of George Herbert and John Donne George Herbert and John Donne lived at the same time, from the end of the 16th century and into the early 17th century. Throughout this time there was a lot of religious controversy and problems. King James of England had introduced a new version of the bible that caused much protest. Religion played a dominant role in people's lives. This may be why both Donne and Herbert wrote poems concerning religion and life. At the time, the average life expectancy was very low; everyone had a sense of their own mortality and shared a fear of death. Of the three poems they each concern religion and life in a different way. Both poets use varying grammatical structures to convey a sense of deep religious meaning as well as relating to normal life. I shall analyze 'The Quip' and 'Vertue' by George Herbert and Holy Sonnet 10 by John Donne. George Herbert wrote many poems in his relatively short life of only 40 years. He was a well educated and influential man. He was the Orator at Trinity College, Cambridge, but despite this history, he those to become a parish priest, 3 years before his death in 1633. ...read more.

As orator at Cambridge and as a successful man he worked alongside 'Glorie and quick wit and conversation'. 'Vertue' is another of Herbert's poems and is in many ways different and similar to 'The Quip'. The poem is in itself much shorter than 'The Quip' and is not as dense. There is still the refrain at the end of each stanza. Herbert still uses the a, b, a, b style and 'Vertue' is an Iambic Tetrameter, like 'The Quip'. This follows Herbert's typical style of writing, despite that Iambic pentameter is becoming more popular at the time and is principally used by Shakespeare. 'Vertue' mainly concerns death and loss. During this period, people were heavily conscious of their morality as life expectancy was not high. Herbert himself died at only 40. His collection of poems 'The Temple' was only published after his death in 1633. This poem was written towards the end of his life when he would have been more aware of death. The poem follows the path of life. The stanzas start with beautiful and happy things but finishes with a darker, unhappy ending. This was how life was seen at the time. ...read more.

This shows Donne's faith in God, which is much the same as Herbert. Donne however seeks accepts the inevitable and gives himself up to God and imprisonment. The whole idea of God imprisoning and ravishing a person is completely paradoxical when God is seen as a forgiving being. To show this, Donne has made the last 2 lines, paradoxes. 'You enthrall mee, never shall be free' and 'ever chast, except you ravish mee'. Many of the lines in Holy Sonnet 10 can be said in a crescendo of force and noise. For example, the first line does this, as does the fourth line. This may be used to emphasize certain points and project power in what Donne is saying. Herbert also used music in some of his poems, especially in 'Vertue' where music is intertwined in the words and the way one can read the poem. All of these structures are used to great effect by Donne to create a powerful poem. Of all these 3 poems, I prefer 'Vertue' as it has great metaphorical meaning and possesses a deep, quiet power behind it. However I believe that John Donne writes better poetry than George Herbert. His poetry has a wildness that is not normal for the age and is more complicated to understand which is what any great poem should be able to do. 1 ...read more.