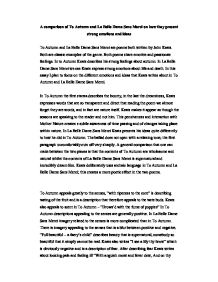 A comparison of To Autumn and La Belle Dame Sans Merci on how they present strong emotions and ideas.

Keats also writes "I see a lily thy brow" which is obviously negative and is a description of fear. After describing fear Keats writes about looking pale and feeling ill "With anguish moist and fever dew, And on thy cheeks a fading rose" Fear and illness are two fundamental elements that Keats would have been experiencing from the point he realized he had tuberculosis. Keats presents his views in To Autumn by writing very vividly his imagination is almost photographic. In La Belle Dame Sans Merci the sonnet is so magical, supernatural and fantasy like the reader will inevitably make up their own mind about what Keats is describing. In To Autumn however the description of autumn is so clear that the reader can quickly see what Keats is describing. La Belle Dame Sans Merci the narrator appeals to feel sorry for the knight in the first stanza, the narrator shows concern in his opening line - "O what can ail thee". The first three stanzas of the sonnet contain many words with negative meanings - "ail", "no birds" and "fever". ...read more.

The plethora of imagery indicating death shows the reader that death was probably on Keats mind whilst he was writing La Belle Dame Sans Merci. To Autumn does not have a theme of love with a person but instead it describes a love of autumn and a love of life in general. Time is presented in different ways in the two poems. In To Autumn the poem has a solid theme of time passing - "soft dying day". There is also regret at the passing of time and the changing of the seasons - "Then in a wailful choir the small gnats mourn" From this quote we can obviously tell that the gnats dislike autumn ending. In La Belle Dame Sans Merci the reader does not have as clear motion of time. The Knight loses track of time, he goes into a trance "Hath thee in thrall". To Autumn and La Belle Dame Sans Merci have both proved very influential poems over a long period of time. Despite living such a young life Keats's is undoubtedly one of the most important poets of the English language and his work will live on for many more years. By James Hilsdon ...read more.