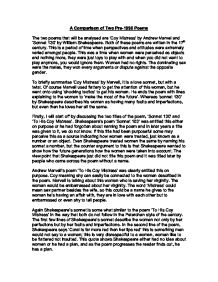 A Comparison of Two Pre-1990 Poems

A Comparison of Two Pre-1990 Poems The two poems that will be analysed are 'Coy Mistress' by Andrew Marvel and 'Sonnet 130' by William Shakespeare. Both of these poems are written in the 17th century. This is a period of time when perspectives and attitudes were extremely varied amongst people. This was a time when women were perceived as objects and nothing more, they were just toys to play with and when you did not want to play anymore, you would ignore them. Women had no rights. The dominating s*x were the males, they won every arguments or dispute against the opposite gender. To briefly summarise 'Coy Mistress' by Marvell, it is a love sonnet, but with a twist. Of course Marvell used flattery to get the attention of this woman, but he went onto using 'shocking tactics' to get his woman. He ends the poem with lines explaining to the woman to 'make the most of the future'. Whereas 'sonnet 130' by Shakespeare describes his woman as having many faults and imperfections, but even then he loves her all the same. Firstly, I will start off by discussing the two titles of the poem, 'Sonnet 130' and 'To His Coy Mistress'. Shakespeare's poem 'Sonnet 103' was entitled this either on purpose or he had forgotten about naming the poem and in later years a title was given to it, we do not know. ...read more.

The middle of 'Sonnet130' is very much the same as the beginning, picking at the woman's faults instead of her fine qualities. Although among all the faults there is a compliment, nearer to the end of the poem Shakespeare adds 'Never have I seen a goddess go.' Implying she is a goddess, that she has a beauty incomparable to others. Even with all of the woman's blemishes Shakespeare she can still be compared to a higher more beautiful being. At this point in the poem we start to get the implication that this lady could be of an ethnic origin. For instance, Shakespeare says, very near the beginning, that 'If snow be white, why then her b*****s are dun.' 'Dun' being a brown colour; if her b*****s are brown, surely then the rest of her body is the same colour. Also to back up this idea of the woman being of an ethnic origin, Shakespeare describes her hair, 'Black wires grow on her head.' Textured similar to a wire, this may mean she has afro like hair. These quotes are ambivalent, many people in the 17th century had never seen a black woman before, and now to hear Shakespeare writing a poem about a dark coloured woman, would be surprising. For a love poem, Marvell's definitely starts well, but when it comes to mid way through the poem we see it is far from the ordinary. ...read more.

Shakespeare exalts his mistress at the end to add emphasis on how great the woman is. Marvell's can be a very controversial subject. It most probably ended the utter flattery of the Petarchan style. He has cleverly modified the style into his own different original style. Marvell uses the Petarchan style in the beginning of his poem, but with certain sarcasm to it, he uses many hyperboles, to an extent that it seems to be insulting what he is saying. The mistress may not have been extremely intelligent and could have really taken what Marvell said to heart, but the more intellectual among the crowds would realise Marvell is just having some fun, with an exaggeration of sarcasm. Similarly 'Sonnet 130' is totally different to an average poem found in the 17th century. Shakespeare correspondingly to Marvell, took the Petarchan style and developed it into his own. Unlike Marvell's poem which was aimed at the upper-class, I feel that this poem is fit for the lower class audience, the hyperboles of the appearance of the woman seem to be what people who have not much intellect or class would think. Upper class members would feel disrespected by the comments in the poem, they certainly would frown upon the poem centred around a black person, the lower class being more understanding will understand the metaphors, and it is every day they would compare the woman to every day objects, for example the wires, an every day object used to describe the hair texture of the woman. . ...read more.