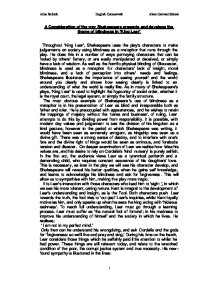 A Consideration of the way Shakespeare presents and develops the theme of blindness in 'King Lear' Throughout 'King Lear', Shakespeare uses the play's characters to make judgements on society using blindness as a metaphor that runs through the play. He does this in a number of ways portraying characters that can be fooled by others' flattery, or are easily manipulated or deceived, or simply have a lack of wisdom. As well as the horrific physical blinding of Gloucester, blindness is used as a metaphor for characters' lack of insight, moral blindness, and a lack of perception into others' needs and feelings. Shakespeare illustrates the importance of seeing yourself and the world around you clearly and shows how seeing clearly is linked to an understanding of what the world is really like. As in many of Shakespeare's plays, 'King Lear' is used to highlight the hypocrisy of social order, whether it is the royal court, the legal system, or simply the family structure. The most obvious example of Shakespeare's use of blindness as a metaphor is in his presentation of Lear as blind and irresponsible both as father and ruler. He is preoccupied with appearances, and he wishes to retain the trappings of majesty without the 'cares and business', of ruling. Lear attempts to do this by dividing power from responsibility. It is possible, with modern day values and judgement to see the division of his kingdom as a kind gesture, however in the period at which Shakespeare was writing, it would have been seen as extremely arrogant, as kingship was seen as a divine gift. ...read more.

Gloucester is similarly misled by Edmond's trickery. Gloucester akin to Lear is na�ve and believes his son's counterfeit letter without hesitation, just as Lear believed Gonerill and Regan's false flattery. Despite what Edmond says, there is no evidence that Edgar loves him any less, yet Gloucester acts hastily and doubts Edgar's love. The two plots parallel each other by echoing themes and ideas. Shakespeare does this to reinforce important issues, in this case filial ingratitude, and the duty of a son or daughter. The most severe form of blindness addressed in the play, is blindness to oneself. In my opinion, Shakespeare tries to show in 'King Lear' that all of the play's characters are partially blind to their own motivations in one way or another. Those characters whose vision is most distorted and are completely blind suffer the most. Lear and Gloucester are the most obvious examples of complete blindness, and suffer death as a result of their flaw. The minor characters also show aspects of blindness and this helps to add texture and layers to the play. Edgar is blind to his brother's trickery, Albany is blind to Gonerill's deception and Cordelia is blind to the consequences of her actions. In the case of Albany, he is blinded by his own emotions. His feelings toward Gonerill cloud his judgement, thus he is blind not only to himself, but to the true intentions of Gonerill: 'How far your eyes may pierce I cannot tell; Striving to better, oft we mar what's well.' Albany portentously notices that Gonerill is perceptive and looks to the future, yet is oblivious to her part in controlling these events: 'My lord, I am guiltless, as I am ignorant Of what hath moved you.' ...read more.

By making a comparison between Lear's sight and a target, Shakespeare is communicating the inevitability of Lear's death at the end of the play. Ceremonial garments and clothing are linked to the theme of deception, as they can hide the truth of reality, thus blinding characters' vision. At the start of the play Lear is overwhelmed with the decoration of majesty, he claims his crown makes him 'ague-proof'. His Kingly garments blind him from the truth, he must discard all those material things, which on the surface seem to express his inner identity, his rich clothing, fine speech and seemingly devoted children, to reach true understanding of humankind. It is on the heath, where Lear's loss of sanity is represented by the stripping of his clothes. Lear is faced with the truth and removes his kingly garments, saying, 'Off off You lendlings'. Lear can now see beyond appearances, and realises his royal finery is proof of his folly, as he no longer has any power. Lear can now start to learn to see again, and recognises that, 'furred gowns hide all'. Only when Lear's vision and sanity are restored, is he ready to wear clothes again. The dramatic use of imagery of sight and blindness are not simply decoration to the play, but contain the central meaning of it. The metaphor of sight illustrates Shakespeare's viewpoints on themes, ideas and situations presented in the play. The relationship between a character's sight, and their fate within the structure of 'King Lear', is at the core of Shakespeare's tragedy. ?? ?? ?? ?? Ailsa Bulloch English Coursework Alton Convent School 1 ...read more.