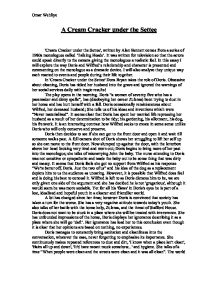 A Cream Cracker under the Settee

A Cream Cracker under the Settee 'Cream Cracker under the Settee', written by Alan Bennett comes from a series of 1980s monologues called 'Talking Heads'. It was written for television so that the actors could speak directly to the camera giving the monologues a realistic feel. In this essay I will explore the way Doris and Wilfred's relationship and character is presented and commenting on the monologue as a dramatic device. I will also analyze they unique way each reacted to events and people during their life together. In 'Cream Cracker under the Settee' Dora Bryan takes the role of Doris. Obsessive about cleaning, Doris has tidied her husband into the grave and ignored the warnings of her social services daily with tragic results! The play opens in the morning. Doris "a women of seventy five who has a pacemaker and dizzy spells", has (disobeying her career Zulema) been trying to dust in her home and has hurt herself with a fall. Doris occasionally reminiscences about Wilfred, her deceased husband; She tells us of his ideas and inventions which were "Never materialized". It seems clear that Doris has spent her married life repressing her husband as a result of her determination to be tidy; his gardening, his allotment, his dog, his fretwork. ...read more.

She has unfounded impressions of the home, Doris displays her ignorance describing it as a place where she will go 'daft'. Her ignorance has lead her to this conclusion even though it is clear that her opinions are based on nothing, no experiences. Doris manages to constantly bring sanitation and cleanliness into the conversation, whatever the case, never forgetting to emphasize its importance. She continuously makes repeated references to dust and dirt, 'I know when a place isn't clean', 'Hairs all up and down', 'It'd have meant muck somehow...' and hygiene. She talks of a time "When people were clean and the streets were clean and it was all clean". The world seems to overwhelm Doris; she seems unable to get a grip on her identity: The photo cracks, the gate bangs, and the sense of forces coming in and threatening is conveyed by her in such repetition of "Bang bang bang all morning, it'll be bang bang bang all afternoon", creating a cyclical situation whereby there is no escape; it is never-ending; it bangs at the beginning, it bangs at the end. She is trapped and overpowered by her situation and she is not oblivious to it. ...read more.

The dusting is my department". Doris argues that that would be fine "provided she did dust... Zulema doesn't dust." This could be misleading, for we only have Doris's word: "I know when a place isn't clean," although Zulema's cleaning may be perfectly satisfactory. This could mean the story we are told is bias or entirely untrue so therefore we might not have a true reflection in terms of their character or the type of person they are. Doris feels regret... for a child which might have been there now to care for her...for refusal of dog which could have barked for aid...and for a lost life and community. She has led a life that seems to control, repress and conserve, symptomatic of a character that needs to feel in charge of life. Only Doris has had the experience of not being able to in the birth of a child and she is still dwelling on it. The play concludes with the implicit implication of Doris' death. It would seem to us the audience that Doris did die as a result of concern with dirt; and the big irony is that she will be tidied into grave like a baby tidied into shoe-box... and become a victim of the dirt she detests. Omar Wehliye ...read more.