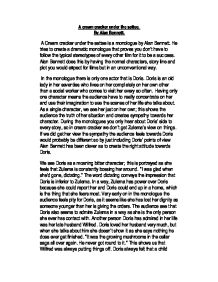 A cream cracker under the settee

A cream cracker under the settee. By Alan Bennett. A Cream cracker under the settee is a monologue by Alan Bennett. He tries to create a dramatic monologue that proves you don't have to follow the typical stereotypes of every other film for it to be a success. Alan Bennett does this by having the normal characters, story line and plot you would expect for films but in an unconventional way. In the monologue there is only one actor that is Doris. Doris is an old lady in her seventies who lives on her completely on her own other than a social worker who comes to visit her every so often. Having only one character means the audience have to really concentrate on her and use their imagination to see the scenes of her life she talks about. As a single character, we see her just on her own; this shows the audience the truth of her situation and creates sympathy towards her character. ...read more.

Doris loved her husband very much, but when she talks about him she doesn't show it as she says nothing he does ever get finished. "It was the growing mushrooms in the cellar saga all over again. He never got round to it." This shows us that Wilfred was always putting things off. Doris always felt that a child would have solved all her problems. "A kiddy`d've solved all that." The one other important person in Doris' life was her son. Doris' son was a stillborn baby. She never really got over the loss of her son and was disgraced when the midwife said "It wasn't fit to be called anything." It is shows that Doris has suffered over her loss and we come to realise that one of the reasons that Doris is on her own is because she has no children to look after her. This means that the audience sympathises with Doris for wishing that she had kids. The language that Alan Bennett uses to portray Doris is he uses colloquial language; I think this is used to try and remind the audience of their own grandmothers. ...read more.

"No I'm alright." Doris has had a lack of freedom for a long time and she feels like a stranger in her own community. "Don't know anybody round here know more." This quotation suggests that Doris used to enjoy being in her village and thought it was a pleasant place to live where everybody knew everyone. Now that society has moved on and she doesn't know any one and she feels trapped. The significance of the title "A cream cracker under the settee" has a very important role in the monologue. The cream cracker is so important because when Doris finds it she feels like she has power over Zulema as she could easily report her to social services to try and get revenge on her. Under the settee suggests out of sight, out of mind this shows how Doris feels within society. I think that Alan Bennett uses the cracker as a metaphor for Doris showing how feels she is unnoticed and has grown old like the cracker, that a cracker snaps easily which shows the fragility of Doris. Another point is that crackers are quite boring and bland which represents Doris's current life. ...read more.