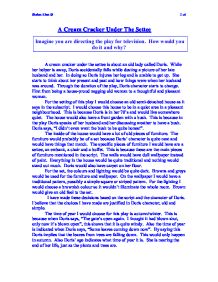 A Cream Cracker Under The Settee - Imagine you are directing the play for television. How would you do it and why?

A Cream Cracker Under The Settee Imagine you are directing the play for television. How would you do it and why? A cream cracker under the settee is about an old lady called Doris. While her helper is away, Doris accidentally falls while dusting a picture of her late husband and her. In doing so Doris injures her leg and is unable to get up. She starts to think about her present and past and how things were when her husband was around. Through the duration of the play, Doris character starts to change. First from being a house-proud nagging old woman to a thoughtful and pleasant woman. For the setting of this play I would choose an old semi-detached house as it says in the subscript. I would choose this house to be in a quiet area in a pleasant neighbourhood. This is because Doris is in her 70's and would live somewhere quiet. The house would also have a front garden with a bush. This is because in the play Doris speaks of her husband and her discussing weather to have a bush. ...read more.

The different times of day the play involves are morning, afternoon, evening and night. The part of the script that indicates that it is morning/afternoon is when Doris says, "Broad daylight". She says this when she sees a boy urinating in her garden. The subscript in the play has written, "It is getting dark". This shows that it is early evening. Also further on in the play Doris speaks, "I wish I was ready for bed". This implies that it has got late. I would say that the character of Doris would probably go to bed at about 9 or 10pm so nighttime is also involved in the play. I would tell the actor playing Doris to wear a dull old dress. This is because in the script Doris says, "I've had this frock for years". I would also tell the actor to act quite house proud and unpleasant at the beginning of the play, but as the play grows the character gets a bit calmer and more pleasant. This is because of what Doris says in the play. ...read more.

This shows a period of time has passed. Doris tries to clean because she feels that Zulema hasn't done a proper job of it. She says, "Well, Zulema, I bet you haven't dusted the top of that." This is when Doris looks up at the picture of her and Wilfred. She is determined to clean it because it is a picture of her and Wilfred. At the end of the play I would have Doris die. This is because she has thought about her life and summed it all up. She has put her soul to rest and justified the decisions she's made in life. For her to die peacefully would be the perfect ending. At the end of the play I want the viewers to have mixed reactions. I want them to feel happy that Doris has changed her character and become nicer but I also want them to feel upset that she has died especially just when her life took a new turn. I want the viewers to think about their lives and hopefully make some change. I want this play to be a learning experience as well as entertainment. Shaban Khan :) 11x4 ...read more.