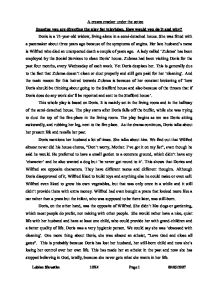 A cream cracker under the settee - Imagine you are directing the play for television. How would you do it and why?

A cream cracker under the settee Imagine you are directing the play for television. How would you do it and why? Doris is a 75-year-old widow, living alone in a semi-detached house. She was fitted with a pacemaker about three years ago because of the symptoms of angina. Her late husband's name is Wilfred who died an unexpected death a couple of years ago. A lady called 'Zulema' has been employed by the Social Services to clean Doris' house. Zulema had been visiting Doris for the past four months, every Wednesday of each week. Yet Doris despises her. This is generally due to the fact that Zulema doesn't clean or dust properly and still gets paid for her 'cleaning'. And the main reason for this hatred towards Zulema is because of her constant bickering of 'how Doris should be thinking about going to the Stafford house and also because of the threats that if Doris does do any work she'll be reported and sent to the Stafford house'. This whole play is based on Doris. It is mainly set in the living room and in the hallway of the semi-detached house. The play starts after Doris falls off the buffet, while she was trying to dust the top of the fire-place in the living room. The play begins as we see Doris sitting awkwardly, and rubbing her leg, next to the fire place. As the drama continues, Doris talks about her present life and recalls her past. Doris mentions her husband a lot of times. She talks about him. ...read more.

The lighting that has been used in the set is acceptable as it is because it emphasizes the mood Doris is in and of the atmosphere of the house. The living room is where most of the play is set. This is the main reason why I'd like to suggest some changes in the set. The wallpaper of the living room should be cream bathed with flowery patterns. I've decided on this because this would make the living room look old-fashioned, which is exactly how Doris' house should look like. The armchair, which Doris often sits on, should be big and old with a musty brown colour. This would show that the armchair was as old as her. There should be a medium-sized, maroon carpet on the floor with embroidery on them and, again, with flowery patterns in it. This would make the living room look darker. This would be a sign of Doris' solitude and at the same time the carpet will make the living room seem more welcoming. The coffee table should be made from oak wood or from a tree similar to the oak tree. I want the table to be plain because I want people to think that Wilfred carved this table out of wood for Doris. It would be for memories and antiques. There should be a two-seater sofa, made up of wood and leather. It should look worn out. This will give the impression that the settee is quite old and will give the living room a touch of ancientness. The fireplace in the living room should be made up of tiled red-brown bricks. ...read more.

This one's going numb now." Quotes like this has led me to believe she dies at the end, if not that night then the other day, because she wouldn't be feeling fine and Zulema wouldn't come until next week. There's no one else who she knows, or anyone else who would check up on her. I want the viewers to feel what I'm feeling about this whole play. There are many feelings that have been evoked by this play. Sadness, sympathy and love are the few things. Sadness comes from the realization of Doris' death. Sympathy comes from the fact that she has no one to love her and is dying a lonely death and, finally, love is induced for our parents, as we would not, ever, even think about leaving our parents in that kind of state. I want them to know how depressing it is to have no one to love or have anyone who loves you. I want them to feel for Doris and feel how gloomy her life has been in her old age. The whole play should make the viewers think of Doris and the sadness of the final days of her life and of any old person's life. From another point of view, I think this play is also trying to put across a message. 'Never to leave your parents side when they are at an old age, because that's when they need you. They looked after you when you were young and now it's your turn to look after them and pay them back with all the love and kindness you possess. ?? ?? ?? ?? Lebina Shrestha 10X4 Page 1 09/05/2007 ...read more.