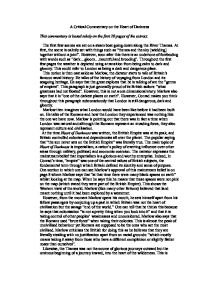 A Critical Commentary on the Heart of Darkness This commentary is based solely on the first 20 pages of the extract. The first few scenes are set on a steam boat going down along the River Thames. At first, the scene is calmly set with things such as "the sea and the sky [wielding] together without a joint". However, soon after this there is an undertone of foreboding with words such as "dark...gloom...mournful and brooding". Throughout the first few pages the weather is depicted using a transition from being calm to dark and gloomy. This could refer to London as being a dark and dangerous place. This notion is then cast aside as Marlow, the dictator starts to talk of Britain's famous naval history. He talks of the history of voyaging from London and its seagoing heritage. He says that the great explores that he is talking of are the "germs of empires". This paragraph is just generally proud of its British sailors: "what greatness had not floated". However, this is not a one dimensional story. Marlow also says that it is "one of the darkest places on earth". However, Conrad makes you think throughout this paragraph subconsciously that London is still dangerous, dark and gloomy. Marlow then imagines what London would have been like before it had been built on. ...read more.

Marlow criticises the British for doing this as he believes that they are literally stealing with no justification apart from on racial grounds: "which mostly means taking it away from those who have a different complexion or slightly flatter noses than ourselves". Likewise, the Thames was not the source of glorious journeys outward but the ominous beginning of a journey inward, into the heart of the wilderness. This is typical of Marlow as a storyteller: he narrates in an ironic tone, giving the impression that his audience's assumptions are wrong, but not presenting a clear alternative to those assumptions. Throughout his story, distinctions such as inward and outward, civilized and savage, dark and light, are called into question. But the irony of Marlow's story is not as pronounced as in a satire, and Marlow's and Conrad's attitudes regarding imperialism are never entirely clear. On page 9, Marlow goes on to talk about Brussels. Again, he describes is as a dark and dangerous place. He says that the city always reminded him of a whited sepulchre. A sepulchre implies death and confinement, and indeed Europe is the origin of the colonial enterprises that bring death to white men and to their colonial subjects; it is also governed by a set of reified social principles that both enable cruelty, dehumanization, and evil and prohibit change. ...read more.

It is at this point where Marlow has a very sudden change in his view towards these natives. He realises that they are "not enemies...[nor] criminals". Having seen this you then come across the opposite of these men. Marlow meets the accountant of the station. He is wearing a white suit and although all of his books are in perfect order, the office is a mess. This shows how the whites want to keep up their appearance, their superiority over the natives. Soon, Marlow sees a van arriving with natives on it. Marlow says "well if a lot of mysterious niggers armed with all kinds of fearful weapons suddenly took to travelling on the road between Deal and Gravesend catching the yokels right and left to carry loads for them, I fancy every farm and cottage thereabouts would get empty very soon". This shows the contrast between the Europeans and the Africans. Marlow is showing how within different countries, natives would be seen very differently. For instance, in Africa they are normal whereas in England they are literally talked about as though they were a disease that no one else wanted to catch. In conclusion, the first 20 pages of this book have and undertone of foreboding. This perhaps suggests that there is something bad coming or Conrad could just be showing how the major Western countries are dark and dangerous and filled with racism. ...read more.