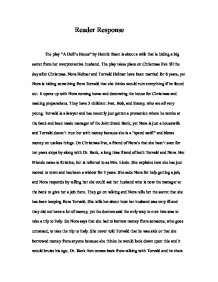 Reader Response The play "A Doll's House" by Henrik Ibsen is about a wife that is hiding a big secret from her overprotective husband. The play takes place on Christmas Eve till the day after Christmas. Nora Helmer and Torvald Helmer have been married for 8 years, yet Nora is hiding something from Torvald that she thinks would ruin everything if he found out. It opens up with Nora coming home and decorating the house for Christmas and making preparations. They have 3 children: Ivar, Bob, and Emmy, who are all very young. Torvald is a lawyer and has recently just gotten a promotion where he works at the bank and been made manager of the Joint Stock Bank, yet Nora is just a housewife and Torvald doesn't trust her with money because she is a "spend swift" and blows money on useless things. On Christmas Eve, a friend of Nora's that she hasn't seen for ten years stops by along with Dr. Rank, a long time friend of both Torvald and Nora. ...read more.

Linde. The maid then enters with a Ball Gown for Nora because she is going to dance the tarantella at the Ball the day after Christmas. Kristine comes by to help her stitch up her dress and then leaves once Torvald comes. They talk about Krogstad and again he refuses to let him keep his job, this time sending him the notice that he is fired in the mail so there is no turning back. Torvald leaves to go to his study and Dr. Rank comes to tell Nora that he is very ill and will be dying soon, and then he tells her that he loves her and she is very shocked, but does not love him back. Dr. Rank then goes into Torvald's study and Krogstad enters. He is very angry and Nora is very scared of him, he tells her that he has left a letter in the mailbox explaining the whole crime of forgery that Nora has committed to her husband. Nora is very upset by this and talks to Kristine about it. ...read more.

Torvald then goes into his study to read the rest of the mail and Nora, frightened, prepared to run away and commit suicide possibly. But before she gets the chance to leave, Torvald comes running out of his study screaming at her and asking if what the letter from Krogstad says is true. She tells him that it is and he tells her what a deceitful liar she is. The maid then comes in with another letter from Krogstad, which he reads immediately. In the letter he says that he forgives her and is sorry and gives her back the I.O.U that she had given her with the forged signature. Nora and Torvald are both very happy and they burn the letter along with the I.O.U, getting rid of all evidence and saying that they are saved. Nora goes to change and then tells Torvald they need to sit down and have a serious conversation, she tells him that he does not understand her and he treats her like a doll, just to play with but never anything serious. She tells him that she has to leave him, he begs her not to but she says she must and then walks out the door. ...read more.