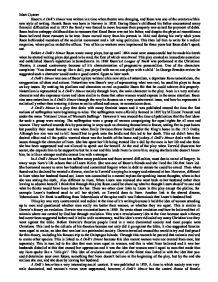 Ibsen's A Doll's House was written in a time when theatre was changing, and Ibsen was one of the creators of this new style of writing. Henrik Ibsen was born in Norway in 1828. During Ibsen's childhood his father encountered many financial difficulties and in 1835 the family was forced to move because their property was seized for payment of debts. Ibsen had an unhappy childhood due to rumours that Knud Ibsen was not his father, and despite the physical resemblance Ibsen believed these rumours to be true. Ibsen moved away from his parents in 1844 and during his early adult years Ibsen befriended members of the socialist movement and a left wing politician. This then led him to write for a radical magazine, where police raided the offices. Two of his co-workers were imprisoned for three years but Ibsen didn't speak out. Before A Doll's House Ibsen wrote many plays, but up until 1864 most were unsuccessful but he made his break when he started writing plays designed to be read, the first of which was Brand. This play created an immediate sensation and established Ibsen's reputation in Scandinavia. ...read more.

In A Doll's House Nora has suffers many problems and faces several difficulties, most due to an act of forgery. In many ways Nora's life echoes that of Laura Kieler. She was one of Ibsen's friends and she lived the life that Nora led. She borrowed money to save her husband and committed forgery when in debt to ensure he could be saved. Then when found out he declared he wanted a divorce, similar to Torvald's saying he is angry and ashamed at her. However, different to Nora when her husband found out, Laura was committed to a mental asylum for speaking insane thoughts, when in fact she was stating the truth., Also different to Nora, When Laura was released she went back to her husband rather then leaving to educate herself. I think that through this play Ibsen could be showing what he thought Laura should've one and what he thinks would have been better for her. There are other clear links to Laura in this play except the plotline, for example Laura's husband used to call her skylark, as Torvald does to Nora. ...read more.

This means that those that enter from outside the society are shunted and mistreated. This society is shown through A Doll's House in a variety of ways. Firstly we can see it through Nora's initial treatment of Mrs. Linde-she does not recognise her, because she has aged so prematurely, from stress-something not found within the agreeable middle-class women, making her stand out. We also see this idea of superficiality at the end of the play, when Torvald discovers Nora's secret. He says 'As regards our relationship - we must appear to be living together just as before. Only appear, of course.' This shows how Torvald views appearances so importantly, he wants Nora to remain there, purely so he wont be frowned upon by society as an outsider, even though he will know deep-down, that's what he will now be. In conclusion there are many different historical ideas and events that build a context, from which Ibsen wrote A Doll's House and their influences are clear in different ways throughout the play, and they help to give a clearer picture of how the characters are living, and the motivations behind their actions. ?? ?? ?? ?? Matt Cuzner ...read more.