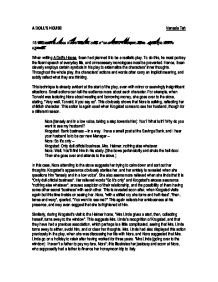 A DOLL'S HOUSE Venesia Teh 16. Discuss instances where Ibsen is able to "externalize" inner problems by using effective symbols. When writing A Doll's House, Ibsen had planned it to be a realistic play. To do this, he must portray the fluent speech of everyday life, and unnecessary monologues must be prevented. Hence, Ibsen cleverly employs certain symbols in his play to externalize the characters' inner thoughts. Throughout the whole play, the characters' actions and words often carry an implicit meaning, and subtly reflect what they are thinking. This technique is already evident at the start of the play, even with minor or seemingly insignificant situations. Small actions can tell the audience more about each character. For example, when Torvald was lecturing Nora about wasting and borrowing money, she goes over to the stove, stating, "Very well, Torvald, if you say so". This obviously shows that Nora is sulking, reflecting her childish character. This action is again used when Krogstad comes to see her husband, though for a different reason. Nora [tensely and in a low voice, taking a step towards him]: You? What is it? Why do you want to see my husband? Krogstad: Bank business - in a way. I have a small post at the Savings Bank, and I hear your husband is to be our new Manager - Nora: So it's only - Krogstad: Only dull official business, Mrs. Helmer; nothing else whatever. Nora: Well, You'll find him in his study. [She bows perfunctorily and shuts the hall door. Then she goes over and attends to the stove.] In this case, Nora attending to the stove suggests her trying to calm down and sort out her thoughts. ...read more.

This illustrates her palpable anxiety about Krogstad's threat of disclosing her forgery, and her desperate wish to destroy the evidence, as well as reflect her plan to immediately pay off everything she owed as to reclaim the offending bond and destroy it. This plan links to her previous conversation with Mrs. Linde, where Mrs. Linde had wrongly assumed that Dr. Rank was the imaginary "rich admirer" who provided the money for Nora. Nora: No, it would never have entered my head to ask Dr. Rank. Though I'm quite sure if I were to ask him... Mrs. Linde: But of course you wouldn't. Nora: Of course not. I can't imagine there'd be any need. But I'm quite sure that if I told Dr. Rank - Nora is reminded that Dr. Rank is quite well-off when Mrs. Linde was discussing about him, "Is Dr. Rank rich?...Oh yes"; and she appears to be considering about asking him for money, as shown twice in the above dialogue, where she distractedly ponders aloud in unfinished sentences, "I'm quite sure if I were to ask him", with an emphasis on the were, and "I'm quite sure if I told Dr. Rank". Hence, with these words, Nora has indirectly publicised her plan of asking money from Dr. Rank to pay of the rest of the debt as to retrieve the bond and destroy it. Later, when Dr. Rank comes and visits Nora, he informs her of his prediction of his upcoming death. Nora: No, you're really being absurd today - and just when I so wanted you to be in a particularly good mood. ...read more.

"Helmer:...Do you realize what you've done? Answer me - do you realize?...Nora [looking fixedly at him, her expression hardening as she speaks]: Yes, now I'm beginning to realize everything?" Nora comes to a realization, not of what she had done to Torvald, but that he is not the man she thought him to be. Her disillusion is further displayed, "Nora looks fixedly at him without speaking" and when Torvald again angrily questions her about her understanding of her doing, "Nora [calm and cold]: Yes". Later, after Torvald receives another letter from Krogstad detailing his apology and with the bond enclosed inside, Torvald rejoices and after destroying all the evidence, resumes to his normal state and forgives his wife. Nora returns to her room, and in reply to Torvald's question of her action, stated, "I'm taking off my fancy-dress". This sentence is meant in a literal way, but at the same time, also symbolizes Nora 'taking off' her illusions, removing her mask and role as Torvald's doll wife. This signifies the end of her marriage, and after a 'reckoning' with Torvald, she leaves him in search of her own life. Ibsen has cleverly used symbols to externalize the characters' inner problems in A Doll's House. From small actions such as moving to the stove, to significant symbols, such as the tarantella, he has managed to effectively convey to the audience what each character is thinking, and hints of upcoming events, without using too much monologue. While preventing the audience to be totally at sea at what is going on, it also keeps the play enjoyable and realistic, making A Doll's House as popular as it is. ...read more.