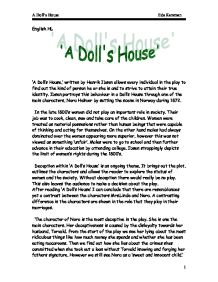 'A Doll's House,' written by Henrik Ibsen - allows every individual in the play to find out the kind of person he or she is and to strive to attain their true identity

English HL 'A Doll's House,' written by Henrik Ibsen allows every individual in the play to find out the kind of person he or she is and to strive to attain their true identity. Ibsen portrays this behaviour in a Doll's House through one of the main characters, Nora Helmer by setting the scene in Norway during 1872. In the late 1800's women did not play an important role in society. Their job was to cook, clean, sew and take care of the children. Women were treated as material possesions rather than human beings that were capable of thinking and acting for themselves. On the other hand males had always dominated over the women appearing more superior, however this was not viewed as something 'unfair'. Males were to go to school and then further advance in their education by attending college. Ibsen strappingly depicts the limit of women's rights during the 1800's. Deception within 'A Doll's House' is an ongoing theme. It brings out the plot, outlines the characters and allows the reader to explore the status of women and the society. Without deception there would really be no play. This also leaves the audience to make a decision about the play. After reading 'A Doll's House' I can conclude that there are resemblances yet a contrast between the characters Mrs.Linde and Nora. A contrasting difference in the characters are shown in the role that they play in their marriages. ...read more.

It is more likely that she is lying to Torvald as he seems to be the victim of most of her lies. Mrs.Linde feels protective over Nora because she still sees her as 'still being a child' and we see this as Dr. Rank enters the room. Nora offers him a macaroon, to which he replies, 'I thought that they were forbidden.' Nora justifies it by telling Dr. Rank that Mrs.Linde has brought them. Mrs.Linde does not come against this because she knows about the consequences of breaking rules around the house. Here we can see how Nora is capable of twisting people to her side in order to be able to keep her lies up without being discovered. Mrs.Lindes tells Nora that she is 'still a child'. Nora 'tosses her head' and begins to reveal to Kristina (Mrs.Linde) a 'dark secret' this is done in order to prove Kristina wrong. She tells Kristina in a manner that she is to 'just like everybody else,' Here we hear about how Nora has saved 'Torvald's life' with a trip to Italy all paid with Nora's 'allowance.' Again her lie does not seem to be any bad as she does it in order to save her husbands life. As we move on we discover that Nora really borrowed the money from Krogstad without her husbands permission. In those days this was a disliked act as the man controlled the incoming and outgoings of the money in the house. ...read more.

Another issue to be discussed is different relationships these women had with their husbands. Torvald and Nora had a relationship where there is no equality. As for Kristina and Krogstad their relationship is much more open. They discuss important matters in a serious manner and are able to compromise however Torvald would always tell Nora that she was not to worry about anything and she would not understand such complex matters. Even though there are many contrasts that can be drawn between Nora and Mrs.Linde there are similarities that are quite apparent. Mrs.Linde shows her loyalty to her family when she accepts a marriage proposal in order to support the welfare of her family. Then, we have Nora who saves her husbands life, which portrays the trend of women sacrificing for the well-being of their families.They both believe in expressing their feelings of pride and fulfillment in helping their families. Ibsens portrays two different women in 'A Doll's House.' Kristina being an independent women who has faced the many troubles life can offer and Nora a typical women of the late 1800's who was under the control of her husband. However Nora is able to 'escape' from this life and set out into the world.I believe that Ibsen was successful in leaving the audience satisfied with the outcome of both women as they both were able to move out from what society condemned as duties of a women and instead set out into the world to complete the duties they had towards themselves. A Doll's House Eda Karaman 1 ...read more.