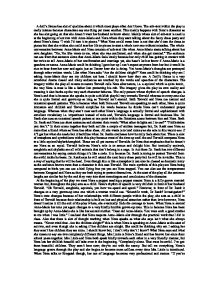 A Dolls House Use Of Language

A doll's House has alot of qualities about it which most plays often don't have. The sub-text within the play is really intense because characters say one thing yet mean another. This mainly happens with Nora's character as she has alot going on that she doesn't want her husband to know about. Mainly where alot of sub-text is used is at the beginning of act two with Anne-Marie and Nora where they start talking about the fancy dress party and about Nora's dress "I wish I'd torn it to pieces." What Nora could mean here is not that she'd torn the dress to pieces but that she wishes she could tear her life to pieces to start a whole new one without mistakes. The whole conversation between Anne-Marie and Nora consists of sub-text like when Anne-Marie starts talking about her own daughter. "No, No. She wrote to me, when she was confirmed, and when she got married." The audience can see from that sentence alone that Anne-Marie feels lonely because her only child has getting in contact with her twice to tell Anne-Marie of her confirmation and marriage yet, she hasn't let her know if Anne-Marie is a grandma or nanna. Anne-Marie could be thinking I gave her up I can't expect anymore from her but it would be nice to hear from her now and again just so I know how she is doing. Yet Anne-Marie's thoughts are portrayed through other written words. Like when Nora asks "Are the children alright?" Nora could be thinking why am I asking Anne-Marie they are my children not hers I should know how they are. A Doll's House is a very emotional drama classic and many audiences are touched by the words and speeches of the characters. The imagery within the play all reverts to nature Torvald calls Nora after nature, i.e. a squirrel which is quite ironic, the way Nora is treat is like a father lion protecting his cub. ...read more.

Torvald is a very strong character and believes that Nora should obey his requests. This is because of an old tradition that a woman should honour her husband. Torvald is a very rich, helpful, ignorant, stereotypical kind of character because even though he thinks he loves Nora he knows love isn't what he feels. We can tell that by the way he treats her. "I wouldn't have you any different. Dear little bird, little darling. But what is it? There's something, isn't there? There is." There is alot of Irony between the couple due to the nature that Henrik Ibsen makes Torvald use throughout the play. For instance Henrik has Torvald compare Nora to squirrels, Skylarks, Singing birds all of which are flight mammals. They are free unlike Nora who is trapped in her own home. Torvalds rhythm of speech is very formal and business like because he sees himself as the leader of his family. He is the type of man that believes his family should be seen not heard but even though he is stern and strict he is also caring and hardworking. His rhythm remains constant throughout the play until the very end where his sentence lengths shorten and he becomes less dominant then Nora. I found this through the practical assessment I did in class I played the part of Helmer and I seen him as a broken man by the end of the play. I and my partner represented the less dominant Torvald by having Nora standing and Torvald sitting so he had to look up at Nora. For the first time at the very end of the play we see Torvald for what he really is, a caring man who was blinded by control. "Tell me the miracle." "I believe. Tell me. If we changed. If we-"All of a sudden Torvald begins to treat Nora as an equal but she feels it is too late to amends. ...read more.

Anne-Marie exemplifies the self-sacrificial role of women that Ibsen highlights in this play. Nora finally leaves her children in Anne-Marie's care, believing that they will be better off with Anne-Marie than they would be with her. Anne-Marie is a very strong respectable woman who knows her place within the Helmer's household. However Nora is the only one who sees her as more than a nanny she sees Anne-Marie as her motherly figure. Anne-Marie isn't a very main character in the play and only has one major scene which is between herself and Nora where there is alot of subtext present. Anne-Marie speaks to Nora quite casually whereas to every-one else she is formal and acts like a worker of the household where she is seen but not heard. Nora feels quite strongly for Anne-Marie and is entirely grateful for all she did for her when Nora was younger. "Dear old Anne-Marie. You were such a good mother to me when I was little." The overall use of language within the play is quite formal the only child within the play is Nora who learns to grow up to a respectable woman. The sentence lengths are short and sweet at the beginning but by the end are long and explanative. This is to show the progression in complexity within the play. Nora, Torvald, Mrs Linde and Krogstad all grow as characters throughout the play and by the end come out being better and stronger people. Nora and Torvald mainly because of all the deceit and lies that are told and Mrs Linde and Krogstad through the love they still held for each other. The main Character who grew within this play is Nora as her short sentences became long ones. Her vocabulary went from simple to complex. Her speech pattern changed from unnatural to a constant natural pattern and finally her overall woman broke through her child like self changing her from a doll to a person. ?? ?? ?? ?? ...read more.