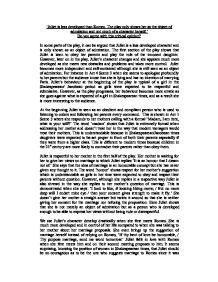 Juliet is less developed than Romeo. The play only shows her as the object of admiration and not much of a character herself. Do you agree with this critical opinion?

'Juliet is less developed than Romeo. The play only shows her as the object of admiration and not much of a character herself.' Do you agree with this critical opinion? In some parts of the play, it can be argued that Juliet is a less developed character and is only shown as an object of admiration. The first section of the play shows that Juliet is keen to obey her parents and play the role of the innocent daughter. However, later on in the play, Juliet's character changes and she appears much more developed as she meets new obstacles and problems and takes more control. Juliet becomes more independent and self-contained although she is still seen as an object of admiration. For instance in Act 4 Scene 2 when she seems to apologise profoundly to her parents but the audience know that she is lying and has no intention of marrying Paris. Juliet's behaviour at the beginning of the play is typical of a girl in the Shakespearean/ Jacobean period as girls were expected to be respectful and submissive. However, as the play progresses, her behaviour becomes more erratic as she goes against what is expected of a girl in Shakespearean times, and as a result she is more interesting to the audience. ...read more.

However, it can be seen as a normal scene in the 21st century as both male and female initiate the talk of marriage. Later, we see Juliet start to develop further as Romeo is exiled and her attempts to refuse the marriage to Paris seem futile. She threatens to take her own life rather than marry Paris and demands help from the friar in an insistent manner. We see this in Act 4, Scene 1 when she says: 'Unless thou tell me how I may prevent it. / If in thy wisdom thou canst give no help, / do thou but call my resolution wise, / and with this knife I'll help it presently.' The manner in which Juliet behaves in this part of the play contrasts with her apparently obedient and submissive manner towards her parents at the start of the play. Juliet shows a very immature side of herself during this part of the play. She doesn't look through the consequences that her death will bring and only thinks about how Romeo and she could be together even in death. ...read more.

In spite of that, it could also be seen as a foolish act as she could have thought about the best thing to do and about the consequences her actions would have on others before taking her own life. In conclusion, there is certainly some evidence that she is at first much less developed that Romeo and more of an object of admiration. However, some people say that she is not just an object of admiration at first but that her character at the beginning leads up to her development towards the end. After she meets Romeo, there is a great deal of evidence of how her behaviour changes and she becomes much more mature and refined and an important character in the play. On the other hand it is also true that Romeo also has an important role in the play because it is because of him Juliet's character changes so much and becomes so much more developed. It helps if we understand the context of the play because then we can understand why Juliet acts in the way she does in parts of the play. Compared to heroines of other plays, Juliet is much more understood by the audience as she opens up to the audience and lets them empathize with her. ...read more.