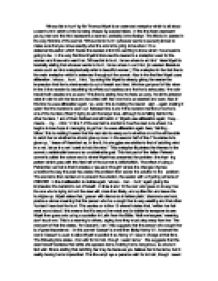 Whoso list to hunt by Sir Thomas Wyatt is an extended metaphor which is all about a deer hunt in which a hind is being chased by several riders. In this the riders represent young men and the hind represents a woman

'Whoso list to hunt' by Sir Thomas Wyatt is an extended metaphor which is all about a deer hunt in which a hind is being chased by several riders. In this the riders represent young men and the hind represents a woman, probably Anne Boleyn. The title is repeated in the very first line of the sonnet, 'Whoso list to hunt,' (whoever wants to pursuit) almost to make sure that you know exactly what the sonnet is going to be about. It's a statement/question which hooks the readers mind into wanting to know what the answer is going to be. In the very first line Wyatt introduces the reader to a metaphor used for the woman and those who want her, 'Whoso list to hunt, I know where is an hind.' Here Wyatt is basically stating that whoever wants to hunt, I know where is an hind, (in western literature words such as hind metaphorically refer to beautiful women.) This metaphor in the first line is the main metaphor which is extended throughout the sonnet. Also in the first line Wyatt uses alliteration, 'whoso... ...read more.

This metaphor illustrates the themes in the sonnet, unattainable love and an unobtainable goal. This first part of the Italian Petrarch sonnet is called the octave and is where Wyatt has presented the problem, the rhyming pattern which goes with this first half of the sonnet is ABBAABBA. The effect of using a Petrarchan sonnet is that it creates a 'pause in thought' where the changed rhymes underline the way the poet has stated the problem then added the solution to the problem. The sonnet is then carried on to present the solution, the sestet, with a rhyming scheme of CDDCEE. In line 9 alliteration is visible again, 'whoso... her... hunt,' again giving the impression the narrator is out of breath. In lines 9 and 10 the narrator goes on to say how the one who is trying to hunt the deer will, more than likely, end up like him and leave the hunt/give up. Wyatt states that, 'graven with diamonds in letters plain,' diamonds are hard, precious stones meaning that the person who has caught her is very wealthy and that other 'hunters' have lost the hunt. ...read more.

The meter of this sonnet is iambic pentameter. The word choice, imaginary language, grammatical disorder techniques, alliteration that makes the sonnet more musical, and metaphors that are used in this sonnet, make it more expressive and rich. The poet utilized first person point of view, using the pronouns I and me. It has three major themes power and weakness, or ruler and subjects; unreachable goal; unobtainable love. In power and weakness the theme is about how the king can do and have whatever he wants and the subjects should obey without any complain. The next theme, unreachable goal, points out how man struggle to get to something unreachable although he knows he can't. The third theme, unobtainable love, shows the speaker is in love with a lady which is in king possession. The tone of this work is hopelessness. I think that by reading this sonnet the reader sympathizes with Wyatt and his unsuccessful and unreachable love, he is expressing his true love towards Anne Boleyn yet still didn't manage to catch her. ...read more.