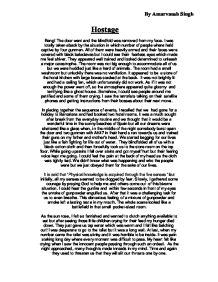 Hostage Bang! The door went and the blindfold was removed from my face. I was totally taken aback by the situation in which number of people where held captive by four gunmen. All of them were heavily armed and their faces were covered with black balaclavas but I could see their fearless eyes which made me feel shiver. They appeared well trained and looked determined to unleash a major catastrophe. The room was not big enough to accommodate all of us but we were huddled just like a herd of animals. The room had a small washroom but unluckily there was no ventilation. It appeared to be a store of the hotel kitchen with large boxes stacked at the back. It was not brightly lit and had a ceiling fan, which unfortunately did not work. As if it was not enough the power went off, so the atmosphere appeared quite gloomy and terrifying like a ghost house. Somehow, I could see people around me petrified and some of them crying. I saw the terrorists talking on their satellite phones and getting instructions from their bosses about their next move. In piecing together the sequence of events, I recalled that we had gone for a holiday to Barcelona and had booked two hotel rooms. ...read more.

It was pain staking long day where every moment was difficult to pass. My heart felt like crying when I saw the innocent people passing through such an ordeal. As the night approached, many thoughts made inroads in my mind. Time and again they used to threaten us that they will slit our throats one by one. This used to be quite devastating for us but my parents used to provide that ample courage which helped me to tide over the crisis. This diverted my mind which eventually went into flash back. I started to shuffle the pages of my past memories as if I was going through my autobiography. I recalled some of my good and bad times of life like a roller coaster with many ups and downs. I cherished my memories with friends and relatives. All these thoughts made me quite sentimental about my existence. I thought that if I survive this moment, I would devote my life towards humanitarian causes and try to bring people closer to each other so that this world becomes a safe heaven! My biological clock started ticking and I felt wearier. This reflected in my body postures and I realised that it was night time. Suddenly, I noticed that one of them showed some signs of mercy towards children by giving them some milk and chocolates. ...read more.

It seemed that the government troops were planning some action to make us free but this made us even more susceptible for any backlash. Suddenly, the door burst open and the commandos entered the room. The exchange of fire led to chaotic scenes and the people started screaming and running towards the door. The commandos swarmed the entire place and in a swift action they over powered the terrorists. It took them nearly four to five hours to clear the entire region and by early dawn we tasted the air of freedom. When we came out we were overwhelmed by the media just like some celebrity. They started to bombard volley of questions on us like who were they? How we felt inside? How many terrorists were their inside the hotel? Did they torture you? What went through your minds, when you were held captive? To which we responded in our own way. We were offered some drinks and snacks as most of us were quite dehydrated. This made me feel refreshing to a certain extent. The entire incident left a deep impact on my mind whether the solution to our problems lies in this dastardly act or there are better ways of understanding the problem. There should be overall development rather than just promoting one region. I wish that nobody should ever undergo such a gruesome incident in his life and the world to be free from the monster of terrorism. ?? ?? ?? ?? ...read more.