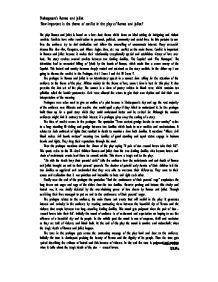 How important is the theme of conflict in the play of Romeo and Juliet?

Shakespeare's Romeo and Juliet 'How important is the theme of conflict in the play of Romeo and Juliet?' The play Romeo and Juliet is based on a love-hate theme which forms an ideal setting for intriguing and violent conflicts. Conflicts have wider ramification in personal, political, community and social lives. As this pertains to our lives the audience try to find similarities and follow the unravelling of consummate interest. Many successful dramas like Ben-Hur, Cleopatra, and Where Eagles Dare, etc. use conflict as the main theme. Conflict is important in Romeo and Juliet because it makes their relationship exceptionally special and establishes victory of love over hate. The story revolves around conflicts between two feuding families, 'The Capulet' and 'The Montague'. The skirmishes lead to unwanted killing of Tybalt by the hands of Romeo, which made him a sworn enemy of the Capulet. This hatred and enmity becomes deeply rooted and entwined as the story unfolds. In the follow up I am going to discuss the conflict in the Prologue, Act I Scene I and Act III Scene V. The prologue in Romeo and Juliet is an introductory speech in a sonnet form calling for the attention of the audience to the theme of the play. Written mainly for the theme of love, sonnet form is best for this play. It also precedes the first act of the play. The sonnet is a form of poetry written in blank verse which contains ten syllables called the Iambic pentameter. Each verse allowed the actors to give their own rhythm and find their own interpretation of the meaning. Prologues were often used to give an outline of a plot because in Shakespeare's day and age the vast majority of the audience were illiterate and reactive who would spoil a play if they failed to understand it. ...read more.

This finally leads them to draw out their swords and commence a fight. There are several points when presence of physical conflict and violence become evident on the stage. After all the provocations of Sampson and Gregory and Abram's reaction, Sampson's sense of emotion takes the better of him. He starts a fight with Abram and drags Gregory along with him. Sampson said "Draw if you be a man - Gregory, remember thy washing blow" urging Gregory to get involved in fighting. At the point when a sword fight between the servants erupts Benvolio happens to arrive on the scene. With good intention at heart, Benvolio pulls out his sword and reasons with the servants to stop the fight. Thus he gets drawn into this fray when Tybalt enters the scene at this point and was immediately outraged at seeing Benvolio with his drawn out sword. The vicious enmity between the two families turned Tybalt bitter. Without trying to gauze the situation he questions Benvolio's intentions and manhood by implying that Benvolio was trying to fight worthless servants. Tybalt says "What, art thou drawn among these heartless hinds? Turn Thee, Benvolio. Look upon thy death". So he challenges Benvolio to fight a real man like him. To these rants Benvolio replied, "I do but keep peace. Put up thy sword, Or manage it to part these men with me". He meant to uphold the peace and invited Tybalt to help in stopping the fight. Tybalt was not ready to take any of this and says "What, drawn, and talk of peace?". He goes on to say to how he hated the Montagues, the word peace and especially Benvolio whom he called a coward. ...read more.

Western society no longer categorises fixed or arranged marriages as a norm. It accounts on mainly culture and belief in today's day and age. A girl in Juliet's situation now would flee though in Shakespeare's day that was not an option. So Juliet has to ask the Nurse for advice and help which would different for a modern audience. From what modern society does hold about arranged marriages is the desperateness of the girl in the situation when the marriage is not accepted and the talk of self-harm and even suicide comes to play. This would not be that different to watch for a modern audience. In Act III Scene IV the conflict is also developed by the actor's every move. Directing the scene would involve make every move of the character's the right one. Tone, volume and language would play a part if conducted correctly. The language, tone and volume of high-status characters (such as Capulet) are very rhythmic, clear and his use of poetic language all characterise him. He would be seen towering over Juliet, Lady Capulet and the Nurse to show just the reign over status. The Nurse, very different in a status match against Capulet, would likely to have a murmured speech and would be out of the way in most conversation. Juliet may be on her knees or sat down uncomfortably when the conflict with her father begins. Lady Capulet and female characters in general are lower to the ground to further emphasise this. To the end, a Romeo and Juliet act without the conflict discussed has no 'story'. Love has the foundation which conquers all literally. The play would still appeal to a modern audience as it has the element of both comparison and surprise, which will always make this love-hate story a truly special one. ...read more.