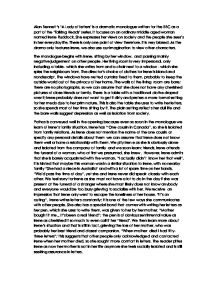 A Lady Of Letters Essay

Alan Bennett's 'A Lady of letters' is a dramatic monologue written for the BBC as a part of the 'Talking Heads' series. It focuses on an ordinary middle aged woman named Irene Ruddock. She expresses her views on society and the people she sees's in her everyday life. There is only one point of view therefore, it is very biased. As the drama only features Irene, we also use our imagination to view other characters. The monologue begins with Irene, sitting by her window, and passing mainly negative judgement on other people. Her living room is very impersonal, only including a table- which she writes from and a chair next to a window- which she spies the neighbours from. The director's choice of clothes for Irene is bland and nondescript. The windows have netted curtains fixed to them, probably to keep the outside world out of the privacy of her home. The walls of the living room are bare; there are no photographs, so we can assume that she does not have any cherished pictures of close friends or family. There is a table with a traditional clothe draped over it; Irene probably does not want to get it dirty and prefers a more formal setting for her meals due to her prim nature. This is also the table she uses to write her letters, so she spends most of her time sitting by it. The plain setting reflects her dull life and the bare walls suggest depression as well as isolation from society. ...read more.

Bennet displays irony in a humorous way at this point when the Highways sends Irene a letter thanking her for her thank you letter as she is angered, because she feels it is a waste of public resources, ironically writing to them scolding them for their reply, "Was this a typical use of public resources?", then "They didn't even bother to reply". She contradicts herself comically. In this monologue pathos and humour are combined very well; there is a strong theme of humorous irony and Irene's lack of self-awareness. When police officers warn Irene about her incessant letter writing she lies to them and denies the accusation, "I don't write letters". When she is then offended by the police officer she goes on to contradict herself by saying, "I intend to write to you superintendent". We are humoured by Irene as she is unaware of the inconsistency in her statement, which is very blatant. We then sympathise with Irene as she is out under pressure by the police questions but she still stay adamant in the fact she has done no wrong. She tries to turn the question back onto the police officers, "'Letters' I said... I bet you write letters. He said 'Not like you, love' 'we're asking you because...'" The end of the section leads the audience to a huge mixture of shock and pathos as the police go on to reveal that, the child, who Irene was so convinced had been a victim of "Kiddy abuse", had in fact died of Leukaemia. ...read more.

There is a lot of joking around in prison and Irene has a lightened sense of humour and everyone knows how to make a joke around her, "Irene, with your qualifications it wouldn't matter if you'd been in the SS". There is character and language humour when Irene makes a blunder when defending one of her inmates, "I don't mean you shouldn't have said it... You got it wrong. It's not ... up. It's ... off", this is humorous as we would expect such a common expletive to be said correctly but Irene, sheltered from such, got it confused and said it wrong. We are surprised as it is unlike Irene's character to swear, when before she could only bring herself to say "Dog mess" and say no more but she is now adapting to a non secluded life with all types of people. Throughout the monologue Bennett surprises us, the audience, by successfully managing to make us laugh and sympathise at the same time. Combining these two elements produces a strong repose from the audience and involvement with the monologue speaker. One theme of this monologue is prejudice, regarding all the assumptions Irene' made about others she did not know that well. This makes us question our own reason for the prejudice against others and we review our past assumptions. It also causes the audience to look further into their community, as many modern day communities do not see every resident socialising with one another. In the end of the monologue, Irene is happy. Bennet shows humanity towards our weaknesses even if we have done wrong in the past. ...read more.