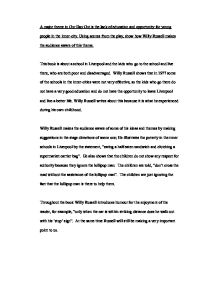 A major theme in Our Day Out is the lack of education and opportunity for young people in the inner-city. Using scenes from the play, show how Willy Russell makes the audience aware of this theme.

A major theme in Our Day Out is the lack of education and opportunity for young people in the inner-city. Using scenes from the play, show how Willy Russell makes the audience aware of this theme. This book is about a school in Liverpool and the kids who go to the school and live there, who are both poor and disadvantaged. Willy Russell shows that in 1977 some of the schools in the inner-cities were not very effective, so the kids who go there do not have a very good education and do not have the opportunity to leave Liverpool and live a better life. Willy Russell writes about this because it is what he experienced during his own childhood. Willy Russell makes the audience aware of some of his ideas and themes by making suggestions in the stage directions of scene one; He illustrates the poverty in the inner schools in Liverpool by the statement, "eating a half eaten sandwich and clutching a supermarket carrier bag". He also shows that the children do not show any respect for authority because they ignore the lollipop man. The children are told, "don't cross the road without the assistance of the lollipop man". The children are just ignoring the fact that the lollipop man is there to help them. ...read more.

They then get back on the coach "weighed down with sweets". Continuing their journey to Conway Castle Mrs Kay decides to stop at the zoo. At the zoo Mr Briggs is going round with a group of kids and they see a bear in a deep pit, the kids ask why it is down in a deep pit. Mr Briggs explains that, "with those claws it could give you a very nasty mark" and it could kill you. They start to discuss that the bear must know about other ways of living and that they feel sorry for it cadged up. Mr Briggs however, says that it doesn't know any other way of living because it has been in captivity its whole life. Ronson, one of the boys then says "it must know about other ways of living, sir. Y' know, free, like the way people have stopped it livin'." This is Russell speaking to us thought Ronson. Mr Briggs and Mrs Kay see each other and leave the kids alone at the children's zoo, because they have been very well behaved, they go and have a chat about having a few animals at school because the kids are respecting them and treating them with care. As Mr Briggs and Mrs Kay get on to the coach the kids are sitting there like little angels, the bus starts to pull away but then is waved down by one of the zoo keepers. ...read more.

He asks her again to come away from the edge, she hold's out her hand, a smile breaks out on her face, he smiles back at her. She says that he looks funny because he is smiling and she has never seen him smile before but she thinks that he looks great when he smiles. She lifts up her arm to grab Mr Briggs hand. She slips, but luckily he grabs her and wraps his arms round her. Everyone gets back on the coach to head home, on the way home Mr Briggs decides to have an unexpected trip to the fair. They all have a great time and lots of photos are taken of Mr Briggs having a good time and not being strict at all. Once they are on the coach most of the kids fall to sleep. When they arrive back in Liverpool Mrs Kay reminds Mr Briggs of all the funny photos of him. He offers to develop them but instead he destroys the evidence of him having fun, because there is going to be no change in Briggs because he likes the way it was when the kids didn't like him and did as he said. I thought that the play was effective and that Russell has been successful in conveying his message, because he has told us about the poverty and poor education kids have in inner cities, and that they don't have many opportunities to have a good, successful life. ...read more.