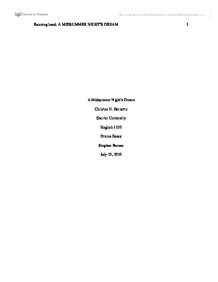 A Midsummer Night's Dream Christen N. Barnette Shorter University English 1120 Drama Essay Stephen Barnes July 13, 2010 A Midsummer Night's Dream A Midsummer Night's Dream is a comedy written by William Shakespeare about three couples in love in Athens. The first couple is Theseus and Hippolyta. The second is Lysander and Hermia then Demetrius and Helena who are not yet a couple. There are fairies that mix up things and cause two men to fall in love with the same woman and fight over her. Some local men gather to work on a play for the upcoming marriage of Theseus and Hippolyta. In the end everyone has found happiness. Act 1 The first act starts at Theseus' court in Athens. Theseus is with his soon to be wife Hippolyta talking about their marriage in four days and how they cannot wait until then. They are then approached by a man named Egeus with concerns of his daughter Hermia who is in love with a man he does not approve of. She is in love with Lysander and he is in love with her but Demetrius is also in love with Hermia and her father approves of him and wants her to marry Demetrius and not Lysander. ...read more.

As they sleep, Puck comes and puts the love juice on Lysander's eyes so when he wakes and see's someone, he will fall in love with them. Puck was supposed to do this to Demetrius but got them mixed up. Lysander awakes to see Helena over him and he is instantly in love with her. Helena has no idea why all of a sudden he has interest in her but does not like it. Helena tells Lysander that w He loves Hermia and not her but he says he does not lover her so. Hermia awakes and does not see Lysander anywhere and wonders why he left. Act 3 Scene one is where all the players for the play have met up to rehearse. They are talking about leaving out the killing of the play because they ladies will not like it too much and also the lion because of its roar. They want to bring the moonlight in so it will be realistic so they look at a calendar to see if there will be a moon out the night of the play. It does shine that night and they are happy about this. ...read more.

It is now time for all the lovers to head to bed. They all leave and go into their rooms for the night to be with one another. The fairies come and over see each couple and bless the palace where they are. The sing and dance and bring peace over each room and couple. Puck then turns to the audience at the end and begins saying the final lines of the play. He hopes that they play did not offend anyone and if so, it was not meant to. A Midsummer Night's Dream is a very well written play. It is a comedy about lovers who fall in love and how sometimes it can be hard for a parent to understand that they love someone that they do not approve of. Then you have fairies that come in and make a mistake and have two men in love with one woman and make a mess of things. But it is cleared up and everything goes back to normal. In the end we learn that love conquers all. ?? ?? ?? ?? A MIDSUMMER NIGHT'S DREAM 3 Running head: A MIDSUMMER NIGHT'S DREAM 1 A MIDSUMMER NIGHT'S DREAM 2 ...read more.