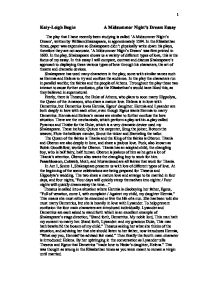 Katy-Leigh Bogin A Midsummer Night's Dream Essay The play that I have recently been studying is called 'A Midsummer Night's Dream', written by William Shakespeare, in approximately 1594. In the Elizabethan times, paper was expensive so Shakespeare didn't physically write down his plays, therefore they are not accurate. 'A Midsummer Night's Dream' was first printed in 1600. In the play, Shakespeare shows us a variety of different types of love, this is the focus of my essay. In this essay I will compare, contrast and discuss Shakespeare's approach to displaying these various types of love through his characters, the art of theatre and dramatic devices. Shakespeare has used many characters in the play, some with similar names such as Hermia and Helena to try and confuse the audience. In the play the characters run in parallel worlds; the fairies and the people of Athens. Throughout the play these two interact to cause further confusion, plus the Elizabethan's would have liked this, as they believed in supernatural. Firstly, there is Theseus, the Duke of Athens, who plans to soon marry Hippolyta, the Queen of the Amazons, who share a mature love. Helena is in love with Demetrius, but Demetrius loves Hermia, Egeus' daughter. Hermia and Lysander are both deeply in love with each other, even though Egeus wants Hermia to marry Demetrius. Hermia and Helena's names are similar to further confuse the love situation. There are the mechanicals, which perform a play-within-a-play called Pyramus and Thisbe for the Duke, which is a very dramatic device used my Shakespeare. ...read more.

We would still be engaged in the topic of love. Lysander and Hermia run away together to get married to Lysander's widowed aunts, therefore go through the woods. Demetrius runs after them to prevent Hermia marrying Lysander, and Helena follows him. This leaves all four main characters in the woods. This brings us to the main events in the play, as all the action occurs in the woods. The fairies live in the woods, this makes the human world and fairy world come together. Oberon sees Demetrius and Helena arguing, where Demetrius tells Helena, "I love thee not." So Oberon decides to do something about it, and tells Puck to place some of the love-in-idleness into Demetrius' eyes, therefore he will then love Helena. Things aren't that simple though, as Puck places the herb into Lysander's eye instead of Demetrius'. This now starts to cause the confusion between the young lovers. Lysander wakes to see Helena; therefore he now loves her instead of loving Hermia. Oberon then places the love-in-idleness into the correct mans eye (Demetrius). This causes further confusion on as both men now love Helena, and she automatically thinks they are playing tricks on her, "O spite! O h**l! I see you all are bent / To set against me, for your merriment:" Helena and Hermia then fall out, as Hermia believes that Helena has stole her love's heart from her. "You thief of love; what, have you come by night, / And stolen my love's heart from him?" ...read more.

Then the other awakens/returns to find their dead lover and the play ends with them then also killing themselves. The play of 'A Midsummer Night's Dream' ends by the fairies coming back to the Duke's wedding to bless him and Hippolyta. An Elizabethan audience would have loved that as they believed in supernatural, plus the two lovers patiently waited four days, and four nights to sleep together as also reproduction was also a big part of Elizabethan's lives. Bottom is left alone at the end. This is as he took advantage of Titania and he was greedy so took for granted everything he had. Therefore loneliness was his punishment. Puck apologises to the audience right at the end of the play, which is Shakespeare's way of saying sorry to any people he may have caused confusion or offence to during the play, "If we shadows have offended, / Think but this (and all is mended)..." I think Shakespeare's message of the play is that, "the course of true love never did run smooth," that you should never rush into sleeping with someone and also that you shouldn't take anything or anyone for granted. We are shown that love can make people do things that they wouldn't normally do. Hermia, and Helena's betrayal of each other, resulting in their friendship to break is a good example of this. Also we are shown that young love is very complicated and confusing. The play is still accessible to us today, and love, along with its confusions and problems remains the same. 1 ...read more.