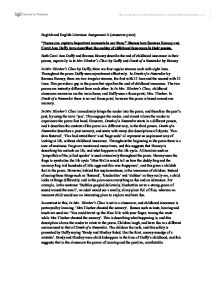 Poems can capture important moments in our lives. Discuss how Seamus Heaney and Carol Ann Duffy have described the ending of childhood innocence in their poems.

English and English Literature Assignment A (crossover piece) "Poems can capture important moments in our lives." Discuss how Seamus Heaney and Carol Ann Duffy have described the ending of childhood innocence in their poems. Both Carol Ann Duffy and Seamus Heaney describe the end of childhood innocence in their poems, especially in In Mrs Tilscher's Class by Duffy and Death of a Naturalist by Heaney In Mrs Tilscher's Class by Duffy, there are four regular stanzas each with eight lines. Throughout the poem Duffy uses enjambment effectively. In Death of a Naturalist by Seamus Heaney, there are two irregular stanzas, the first with 21 lines and the second with 12 lines. This provides a gap in the poem that signifies the end of childhood innocence. The two poems are instantly different from each other. In In Mrs. Tilscher's Class, childhood classroom memories are the main focus, and Duffy uses a focus point; Mrs. Tilscher. In Death of a Naturalist there is no real focus point, however the poem is based around one memory. In Mrs Tilscher's Class immediately brings the reader into the poem, and therefore the poet's past, by using the term 'you'. This engages the reader, and almost allows the reader to experience the poem first hand. ...read more.

There is a switch of roles from the first stanza, when Heaney was collecting frogspawn, to where he feels intimidated by the frogs. In conclusion, both 'Death of a Naturalist' and 'Mrs Tilscher's Class' describe the ending of childhood innocence, using different methods and techniques to engage the reader. They both start by describing how they as children were innocent, but their innocence is lost as the poems go on, with both poets changing the tone and rhythm from fairly 'relaxed' and 'happy' to worrying about both the future and the present, and realising what life really is. In 'Midterm Break' by Seamus Heaney, his four year old brother passes away, and 'Death of a Naturalist' shows similarities to this with the fear and worry that is portrayed at the end of the poem. 'Blackberry Picking' by Seamus Heaney shows that nothing good lasts for long, as the picked blackberries rot soon after picking, and this shows similarities to 'Death of a Naturalist', where the innocence of childhood cannot last forever. In 'Before You Were Mine' by Carol Ann Duffy, similarities to 'In Mrs Tilscher's Class' are shown, as there is a sense of looking back on a life that was happy. Also, the poem is looking back on two innocent lives, herself in 'In Mrs Tilscher's Class', and her mother's in 'Before You Were Mine'. ?? ?? ?? ?? ...read more.