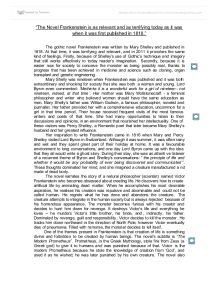 "The Novel Frankenstein is as relevant and as terrifying today as it was when it was first published in 1818." The gothic novel Frankenstein was written by Mary Shelley and published in 1818. At that time, it was terrifying and relevant, and in 2011 it provokes the same kind of feelings. Firstly, because of Shelley's use of Gothic's technique and imagery that still works effectively to today reader's imagination. Secondly, because it is easier now for society to conceive the monster as being possibly real, thanks to progress that has been achieved in medicine and science such as cloning, organ transplant and genetic engineering. Mary Shelly was nineteen when Frankenstein was published and it was both extraordinary and shocking for society that she was both a woman and young. Lord Byron even commented: 'Methinks it is a wonderful work for a girl of nineteen- not nineteen, indeed, at that time'. Her mother was Mary Wollstonecraft - a feminist philosopher and writer who believed women should have the same education as men. Mary Shelly's father was William Godwin, a famous philosopher, novelist and journalist. Her father provided her with a comprehensive education, uncommon for a girl in that time period. Their house received frequent visits of the most famous writers and poets of that time. She had many opportunities to listen to their discussions and opinions, in an environment that nourished her intellectuality. ...read more.

The "rain" has connotations of depression and melancholy, while the darkness of the room makes it uncomfortable. This sets a dark scenario to the novel, making the reader imagines itself in such environment and feel fearful and tense. Shelley creates a threatening atmosphere without developing it further and the rest is left to the reader's choice and imagination. In this scenario the creature is introduced, which makes the reader built a negative association with it. The feelings and reactions these Gothic techniques and imagery provoked in 1818 are still terrifying to today's audience. He was determined and willing to finish his creation. However, when he finished it, he realised what he has done. Instead of a miracle to be glorified, he describes it as something hideous - "dun white sockets", "shrivelled complexion" and "straight black lips". These are interesting word choices, because the reader creates an unnatural image of the creature and see it as deformed, aberrant and monstrous. The words "dun" and "shrivelled" give an impression of something rotting. Its "black lips" gives us an impression of something dead, evil and inhuman. Furthermore, Shelly never gives the creature a name. Victor always refers it merely as "monster" or "creature"; which influences the reader to never imagine his creation with human features. All Shelly's techniques above-mentioned, manipulates the reader not to identify himself with the 'monster' and imagine it as a terrifying and horrendous creature, both now and in 1818. ...read more.

This makes the reader confused and unable to decide who the villain of the story actually is. In my opinion, Victor is the true monster and he cannot blame his creation because no one is born evil. However, I do not believe that was his intention. His first motivations were pure as he only wanted to see his mother again. Although his intentions were good, he was taken by obsession which led him to not think clearly, which caused him not to analyse what exactly he was doing. This shows that even the most innocent and positive attempts can lead to a disaster, which can be frightening both now and in 1818. In my opinion, Frankenstein is still relevant and terrifying in 2011 as it was in 1818. Gothic techniques and imagery, like abominable and dead appearance combined with a tense atmosphere, manipulate the reader to fell terrified and scared. Obsession showed in the novel can also be frightening, because it shows the dark side of human nature and drive unexpected behaviour, which most of us consider quite scary. Love, affection and sadness of losing someone we love and the possibility of bringing this person back to life is still relevant. Furthermore, it raises questions about morality (the right of humanity to play God) and appearance (someone that is physically different is still misjudged and discriminated), two aspects that are still relevant to our society as they were in 1818. ...read more.

A well written, fluent and engaging essay which successfully answers the set question. Good knowledge and understanding of the novel and why Shelley wrote it, and some thoughtful and perceptive comments on its relevance to the modern reader.