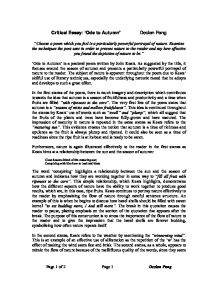 A particularly powerful portrayal of nature. Examine the techniques the poet uses in order to present nature to the reader and say how effective you found the depiction of nature to be.&quot; 'Ode to Autumn' is a pastoral poem written by John Keats

Critical Essay: 'Ode to Autumn' Declan Pang "Choose a poem which you feel is a particularly powerful portrayal of nature. Examine the techniques the poet uses in order to present nature to the reader and say how effective you found the depiction of nature to be." 'Ode to Autumn' is a pastoral poem written by John Keats. As suggested by the title, it focuses around the season of autumn and presents a particularly powerful portrayal of nature to the reader. The subject of nature is apparent throughout the poem due to Keats' skilful use of literary techniques, especially the underlying narcotic mood that he adopts and develops to such a great effect. In the first stanza of the poem, there is much imagery and description which contributes towards the idea that autumn is a season of fruitfulness and productivity and a time when fruits are filled "with ripeness to the core". The very first line of the poem states that autumn is a "season of mists and mellow fruitfulness". ...read more.

In the second stanza, Keats refers to the weather by mentioning the "winnowing wind". This is an example of an effective use of alliteration as the repetition of the 'w' has the effect of making the wind seem fast and brisk. The second stanza, as a whole, appears to mimic the flow of nature because of the mellifluous quality of the words, since they seem to flow together seamlessly. In addition, Keats makes reference to time in the last line of the stanza, with the phrase "hours by hours". This continues to emphasise what the poet has already mentioned. It gives a strong idea of timelessness in connection with nature and gives the impression that things are happening at a slow pace and very gradually. Further on in the poem, Keats continues to use alliteration, however this time the alliteration is hard, as demonstrated when he mentions the "soft-dying day". The repeated 'd' sounds show how the alliteration has changed since the beginning of the poem and is no longer soft. ...read more.

"Ode to Autumn" is a poem which is a powerful portrayal of nature and demonstrates the action of different aspects of nature to the reader. At one level, it is simply a tale of the season of autumn with full and vivid descriptions of nature at work. However, at another, it is a hugely effective piece of poetry which serves to investigate the different characteristics of nature during the season of autumn. In the last stanza in particular, it is interesting for the reader to observe how Keats shows the reactions of many different species of animal as winter approaches. It is fair to say that the reactions of the animals reflect his own opinion on winter. Just like the animals, he is determined that the season of autumn should not end. For him, autumn is a time when a new world emerges, complete with so many fascinating characteristics. The richness and quality of description in his poem proves to the reader that it is a shame to leave this world behind as winter approaches. ?? ?? ?? ?? Page 1 of 2 Page 1 Declan Pang ...read more.