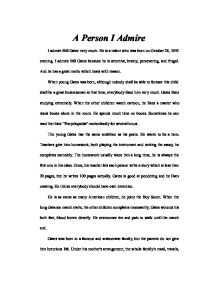 A Person I Admire I admire Bill Gates very much. He is a talent who was born on October 28, 1955 evening. I admire Bill Gates because he is attentive, brainy, persevering, and frugal. And he has a great motto which hears with reason. When young Gates was born, although nobody shall be able to foresee this child shall be a great businessman at that time, everybody liked him very much. Gates likes studying extremely. When the other children watch cartoon, he likes a master who reads books alone in the room. ...read more.

Once, his teacher lets each person write a story which is less than 20 pages, but he writes 100 pages actually. Gates is good at pondering and he likes creating. He thinks everybody should have own invention. He is as same as many American children, he joins the Boy Scout. When the long distance march starts, the other children complains incessantly, Gates wounds his both feet, blood bursts directly. He overcomes tire and pain to walk until the march end. Gates was born in a famous and aristocratic family, but the parents do not give him luxurious life. ...read more.

Since he studies in middle school, he is infatuated with the computers, from this time on Gates and the computers become the indissoluble bond. Then Bill Gates uses his own brightness and diligence. He lets 900 US dollars become 13.9 billion US dollars in 20 years. Gates lets the common people be surprised. Some people said that, Gates and his Microsoft Corporation will be able to change the entire world. Yes, Bill Gates is a very famous person. Not only he has a lot of money, but also he is an aspirant person. After I know how he becomes very rich, I admire him very much, including his attentive, brainy, persevering, and frugal. So I think he is a real hero in our world. ...read more.