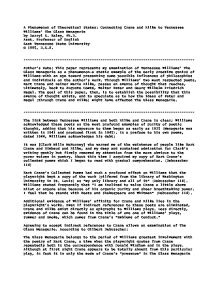 A Phenomenon of Theoretical States: Connecting Crane and Rilke to Tennessee Williams' The Glass Menagerie.

In the second half of the play, [3] the memory is reenacted (for example, Amanda�s story about seventeen gentlemen callers is reenacted by Laura and Jim, and the memory of Mr. Wingfield�s abandonment of the family is reenacted by Tom). Here too is a connection to Comt�; Thompson outlines the basic laws of the field which is Williams� memory plays. In Day and Woods� collection of essays, Williams directly addresses the arrest of time mentioned by Thompson: In a play, time is arrested in the sense of being confined. By a sort of legerdemain, events are made to remain events, rather than being reduced so quickly to mere occurrences. The audience can sit back in a comforting dusk to watch a world which is flooded with light and in which emotion and action have a dimension and dignity that they would likewise have in real existence, if only the shattering intrusion of time could be locked out. (Williams, Where I Live 52) The outcome of this phenomenon, Thompson states, is the recognition of a reality: "Human love, itself, however, is shown as ultimately inadequate compensation for our epiphanic desires. Fleeting, incomplete, and too easily betrayed, human love too often leads only to the recognition of mutual despair" (23). Throughout her examination of this play, Thompson presents Tom as the existential man whose abandonment of his mother and sister represents both a personal search for self-realization and the collective quest of 20th century humanity to restore wholeness of self fragmented by dehumanization and disintegration. In "The Synthetic Myth," Esther Merle Jackson puts forward the idea that The Glass Menagerie is a "schematic explication of modern life" (26). Williams� uses memory, Jackson states, as a reference point around which are clustered the psychological, sociological, religious, and philosophical symbols he wishes to present (27). The ending of the play is significant, according to Jackson, mainly in that it is not a conclusion; in this play "the playwright stops the movement of his progression of suffering and announces that the play, as yet without a philosophical resolution, is over" (35). ...read more.

Because Mr. Wingfield, Laura, Amanda, and Jim are parts of Tom�s consciousness, he can never truly escape them. In this sense, as Tom states in his fifth soliloquy, he is truly "more faithful than I intended to be" (Williams, Menagerie 1568). Tennessee Williams gives us no indication that Tom�s escape from his father, Amanda, Laura, and Jim ever happens � what is most compelling about the play is that Tom passes to the reader and the audience the responsibility of making meaning out of his life. Although signs of Pater�s aesthetic, poetic passion, can be found in this play, the premise of the action is phenomenological and the structure of the argument is positivistic. Because Tom continues to experience the memory, again and again, his philosophic approach to understanding the grief and guilt attached to his abandonment of his mother goes beyond Hegel�s aim to that philosopher�s idea of Concept: Tom refuses to accept the situation as "the corpse which has left the tendency behind" (Kaufmann 10). In the play, Tom is able to relate his experience to the audience he has discovered, "by a well-combined use of reasoning and observation, the actual laws of phenomena�that is to say, their invariable relations of succession and likeness" (Comt� 2). He is able to express the logic and the laws of his situation (his field, memory); however, at the end of the play Tom has not grasped the meaning locked within his own memory. In remembering himself in relationship to his father, his mother, his sister and his best friend, Tom the narrator/magician imbues the characters with the magic he claims in his first soliloquy to possess. Although The Glass Menagerie is considered to be a non-realistic play, there is a definite reality in Tom�s coloring of his memory with his unique consciousness. Although Tom the narrator/magician may express this idea through hyperbole, who among us can claim not to edit our memories in this fashion? This, indeed, is what separates memory, which is subjective, from our objective experience of reality. ...read more.