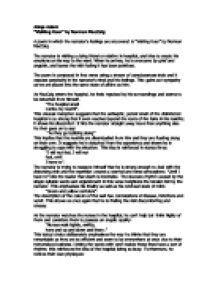 A poem in which the narrators feelings are uncovered is Visiting Hour by Norman MacCaig.

Aniqa Aslam "Visiting Hour" by Norman MacCaig A poem in which the narrator's feelings are uncovered is "Visiting Hour" by Norman MacCaig. The narrator is visiting a dying friend or relative in hospital, and tries to evade his emotions on his way to the ward. When he arrives, he is overcome by grief and anguish, and leaves the visit feeling it has been pointless. The poem is composed in free verse using a stream of consciousness style and it exposes perplexity in the narrator's mind and his feelings. This gains our sympathy as we are placed into the same state of affairs as him. As MacCaig enters the hospital, he feels repulsed by his surroundings and seems to be detached from himself. "The hospital smell combs my nostril". This unusual metaphor suggests that the antiseptic, potent smell of the disinfected hospital is so strong that it even reaches beyond the roots of the hairs in his nostrils; it shows his discomfort. It hits the narrator straight away more than anything else. He then goes on to say: "As they go bobbing along" This implies that the nostrils are disembodied from him and they are floating along on their own. ...read more.

He acknowledges that the nurses have experienced a lot in their line of work and respects that they can still remain so composed and brave after all the deaths they have seen whereas he feels he can't bear the sorrow of losing just one relative. Upon his arrival, he states: "Ward 7." The use of the abrupt statement followed by a full stop shows how he stops completely in his tracks. He is finally ready to confront his feelings. The digit seven is more effective than the word because it allows the user to see through MacCaig's eyes. He has feared this moment for quite some time and is preparing himself for what lies ahead. As the narrator enters ward 7, he witnesses a frail, exhausted figure whose: "A withered hand trembles on its stalk". In the metaphor, the woman's hand is compared to a withered flower; it highlights how fragile she really is. The word choice is excellent because like the withered flower, this woman is dying and her arms as so thin, they are almost stalk-like. The flower imagery also suggests the woman's former beauty which the narrator can still see. The reader feels a great deal of sympathy at this point, both for the woman and the narrator who has to endure her physical weakness without being able to do anything to help. ...read more.

He has lost all self control, which is why he "clumsily rises" and leaves the ward. The use of oxymoron in: "Leaving behind only books that will not be read and fruitless fruits" makes clear how he feels that the entire visit has been of no benefit to him or her; her condition is beyond his reach. He explains that the books will not be read because she is heading for death and the fruits are "fruitless" because they will too be of no use to her, she can't consume them; defeating their purpose. He departs feeling saddened that his presence was making no difference to the path she was heading towards. Overall, "Visiting Hour" is extremely emotional and moving as MacCaig uses effective techniques to convey his feelings to us and it makes the reader more aware of overpowering feelings which people sometimes feel they have to hide. As I have visited a sick relative, I can relate to the whole experience and the feelings conveyed. We can imagine the scenes vividly through the narrator' eyes due to his focus on senses; sight and smell and the unusual, sophisticated metaphors give us a strong picture of how ill his relative is. MacCaig demonstrates an exceptional poem in which he bares his feelings and his ingeniously written piece has left a long-lasting impression on me. ?? ?? ?? ?? ...read more.