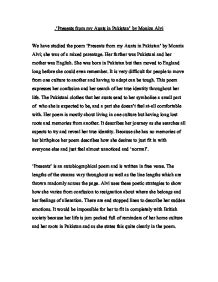 .Presents from my Aunts in Pakistan by Moniza Alvi

.'Presents from my Aunts in Pakistan' by Moniza Alvi We have studied the poem 'Presents from my Aunts in Pakistan' by Monzia Alvi; she was of a mixed parentage. Her farther was Pakistani and her mother was English. She was born in Pakistan but then moved to England long before she could even remember. It is very difficult for people to move from one culture to another and having to adapt can be tough. This poem expresses her confusion and her search of her true identity throughout her life. The Pakistani clothes that her aunts send to her symbolise a small part of who she is expected to be, and a part she doesn't feel at-all comfortable with. Her poem is mostly about living in one culture but having long lost roots and memories from another. It describes her journey as she searches all aspects to try and reveal her true identity. Because she has no memories of her birthplace her poem describes how she desires to just fit in with everyone else and just feel almost unnoticed and 'normal'. 'Presents' is an autobiographical poem and is written in free verse. ...read more.

The word 'costume' suggests that the clothes are unnatural and Alvi suggests she does not feel herself when she wears them, as if they are theatrical and she has to act a part. As the costume 'clung' to her the poet shows her sense of awkwardness with the clothes - they don't belong together. She feels they don't belong together. She feels a sense of discomfort, as if she is trapped. Alvi feels as if she is on fire, 'aflame'- standing out from the crowd but cannot come to rise up to herself like a phoenix from the flames instead She feels self-conscious and She implies she is incomplete, seeing herself as 'half- English' and inadequate, unlike her Aunt Jamillia who she envies for being fully Asian whereas Alvi is only 'half'. In the third stanza, Alvi had second thoughts about the traditional camel-skin lamp. 'I wanted' reflects the 'I longed' expression earlier, the poet is constantly wanting answers as too where she belongs. The lamp is a symbol to indicate the poet's connection with the camel, as she considers the cruelty of how it has been made and forced to be something it didn't want to be and how it has been taken from its natural habitat; it does ...read more.

'My aunts in shaded rooms, Screened from male visitors' This section shows the social differences between the sexes; a strict Muslim upbringing vs. a more liberal UK attitude, in Pakistan it is tradition to keep the sexes apart and Alvi also refers to 'shaded rooms' as if the women are hidden away. The use of the word 'tissue' makes the reader picture something very delicate and fragile like Alvi herself but also it suggests she also feels she has been wrapped up and carefully placed away from her true culture by her parents, just like the presents. Finally in the last and shortest stanza, Alvi humbles herself as she imagines that she goes back to visit her home country. She talks about the poverty and the beggars on the streets and even visualises herself amongst people who are 'lower class'. But even they are all part of a group; Alvi feels alienated again, everyone that surrounds her know who they are and know where they have come from but she is almost drifting between the two cultures. As she looks through the fretwork at the Shalimar Gardens she glimpses only pieces of what she could be. She implies that she feels almost like and outsider to everyone else. 'No fixed nationality' and once more she feels alien as if she does not belong anywhere. ...read more.

A superb example of the level of analysis required to achieve a high grade. The candidate is very through in their response and goes into great detail when discussing each section of the poem. In addition the essay is well ...

A superb example of the level of analysis required to achieve a high grade. The candidate is very through in their response and goes into great detail when discussing each section of the poem. In addition the essay is well laid out and flows nicely.

The candidate goes into a fantastic level of depth and analysis and carefully pulls apart each stanza, discussing the relationship between lines in the poem and the poets feelings. S/he manages to mention many of the key points I had in mind when I read the poem. The only thing lacking in this essay is discussion of the linguistic terms used, such as the metaphorical language used in the following line Ã¢â‚¬Å“there was conflict, a fractured landÃ¢â‚¬Â the split in Pakistan is compared to her confused identify. She herself is split between the culture of Pakistan and the culture of England, in a sense she is fractured, and torn between two worlds. The use of appropriate technical terms and perhaps independent research into Pakistan as a country is all that is required to turn this into an A/A* piece of work.

The quality of this essay is exceptional, it is very well written, spelling and grammar are flawless, punctuation is used appropriately and there is a good range of vocabulary. Overall an excellent example of the work expected from a high grade candidate.