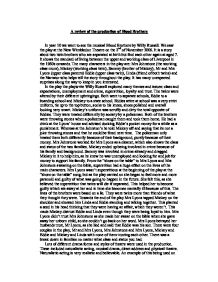 A review of the production of Blood Brothers

A review of the production of Blood Brothers In year 10 we went to see the musical Blood Brothers by w***y Russell. We saw the play at the New Wimbledon Theatre on the 2nd of November 2006. It is a story about two twin brothers who are separated at birth but find each other again at aged 7. It shows the standard of living between the upper and working class of Liverpool in the 1960s onwards. The many characters in the play are: Mrs Johnstone (the working class mum), Mickey (working class twin), Sammy (brother of Mickey), Mr and Mrs Lyons (upper class parents) Eddie (upper class twin), Linda (friend of both twins) and the Narrator who helps tell the story throughout the play. It has many unexpected surprises along the way to keep in you interested. In the play the playwrite w***y Russell explored many themes and issues: class and expectations, unemployment and crime, superstition, loyalty and trust. The twins were altered by their different upbringings. Both went to separate schools, Eddie to a boarding school and Mickey to a state school. Eddies attire at school was a very strict uniform, tie up to the top button, socks to his knees, shoes polished and overall looking very smart. ...read more.

He had a very harsh Liverpudlian accent, which supports my thought that he was conscience the characters in the play were all from Liverpool. He wore a black suit with a shirt underneath which he didn't change from throughout the musical. It was a lot different from the other characters in the play. I think it was important that he dressed individually as he wasn't part of the production as a main character in the story line. It also helped the audience not to get confused. As well as the performances by the actors, the design and staging of the production also highlighted the themes and helped to communicate the status and class of the characters to the audience. The costumes of Mickey and Eddie were very contrasting. When they were younger Mickey was relaxed as a child whereas Eddie was very constricted, as he didn't mess about and have fun with the other little boys his age. This showed through their clothes. Eddie wore his knee-high socks and polished shoes whereas Mickey wore Sammy's scruffy old big jumper. This told us that Mickey's family couldn't afford to buy new clothes for him so he had his older brothers "hand-me-downs". Eddie on the other hand could afford new clothes and dressed smartly because he had the money to do so. ...read more.

At the end of the production special effects were also used when the gunshots were fired. Working in conjunction with all these aspects to create atmosphere and emotion was the music. Specific songs were used at key moments in the musical to emphasise a situation or emotion. The sad and emotional " Tell Me Its Not True" directly affected me. It was such a sorrowful song about a mother asking if it was real, that her two children had died. It was full of emotion and made the atmosphere very downcast and forlorn. I though the Blood Brothers was a fantastic musical and I would definitely like to see it again. I really enjoyed the beginning of the production as it didn't give too much away about the rest of the play and it kept you guessing. Blood Brothers is still relevant to people today as the different classes are still existent and your job still depends on your background. I saw the play before at the Phoenix Theatre in London and I thought it was much better there than at the New Wimbledon Theatre. I think that was because of the compactness in the Phoenix. It kept all the atmosphere together and as an audience we experienced the characters rollercoaster of emotions together. The overall message that the production left me thinking about was that you have to except people for who they are and that family is very important. ...read more.