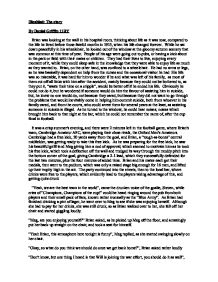 A story based on the poem Disabled by Wilfred Owen

Disabled: The story By Daniel Griffin 11RY Brian was looking at the wall in his hospital room, thinking about life as it was now, compared to the life he lived before those fateful months in 1915, when his life changed forever. While he sat down peacefully in his wheelchair, he looked out of the window at the gloomy autumn scenery that was common at this time of year. People of his age were going out to pubs, or having a kick about in the park or field with their mates or children. They had their lives to live, enjoying every moment of it, while they could sleep safe in the knowledge that they were able to enjoy life as much as they wanted to. Brian, on the other hand, was confined to a wheelchair. He had no arms or legs, so he was basically dependent on help from the nurses and the occasional visitor he had His life was so miserable, it was hard for him to wonder if he and what was left of his family, as most of them cut off all links with him after the accident, mainly because they could not be bothered to, as they put it, "waste their time on a cripple", would be better off if he ended his life. Obviously he could not do it, but he wondered if someone would do him the favour of assisting him in suicide, but, he knew no one would do, not because they cared, but because they did not want to go through the problems that would inevitably come in helping him commit suicide, both from whoever in his family cared, and from the courts, who could arrest them for several years at the least, as assisting someone in suicide is illegal. ...read more.

Brian had packed his own food for his journey, and it was nothing fancy, just some sandwiches, with either ham or corned beef inside them, and some water for him to quench his thirst. Something else he kept with him that no one else but him and Meg knew was a letter Meg wrote, wishing him the best of luck in the war, and that she hoped that Brian would come back as a hero. Brian made a promise to Meg that he would have the letter around his right ankle, covered by the long socks he was going to wear, also covered by long, baggy trousers. Three stops into his journey, which stopped at virtually every station to pick recruits, a young man, about twenty years old, with a body that looked like it was chiselled out of stone, walked into Brian's cabin. He was a very quiet bloke, who seemed to keeping himself to himself, but on the rare occasions that he did talk, mainly when people came around offering food, he had a very soft voice anyway, so his looks were very deceiving as far as his personality was concerned. Halfway through the journey to Portsmouth, it started raining heavily, and this would carry on throughout the rest of the journey. After what seemed like an age, they got to Portsmouth, and, after putting on their rain jackets, Brian and Will got off the train, and took the short, ten minute walk, to the docks, where the boats were ready to ship these men to Calle, in France. Brian was tired, and slept through most of the boat trip, mainly because he was easily seas sick, but also because of the fatigue he had, and was woken up as they boat docked at Calle. ...read more.

Brian had his food fed to him, then went to sleep for the rest of the night. Next morning, Brian slept in till Midday, had his lunch, and then was put into his wheelchair. Soon after he was in his wheelchair, he heard a motorbike revving outside. Now, normally he did not take notice of these kind of noises, but today he decided to, and to his horror, he saw Meg, on the bike of Will, who had come back from duty after having fractured his arm. He was due to go back in three weeks, but Brian wished he had already been gone, so that he didn't have to see his own heart broken. Brian called for the nurse who was in the room at the time, and asked if she could give Meg the following message. "Meg, I have seen enough, I was watching you outside of the window. I do not want you to fill my head and heart with lies, so please, you go on and enjoy your life. I know it must be a struggle looking after me, I can understand that, I just don't want you to have to lie to me any longer. Please, for my sake, just enjoy your life. You do not need to visit me any more, but if you want to you can send me letters, and deliver them to the hospital. Goodbye, Brian". Upon hearing the nurse deliver the news, Brian could then hear whimpers in the background, followed by the footsteps slowly disappearing in to the distance. Brian then looked out of the window, as the bike drove smoothly out of the distance, and Brian just looked out of the window at the world, a world he could no longer be an active part of, but a world he still had to put up with. ...read more.