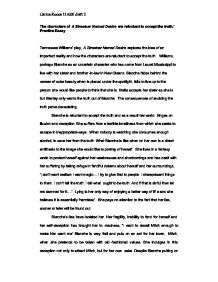 The characters of A Streetcar Named Desire are reluctant to accept the truth.' Practice Essay Tennessee Williams' play, A Streetcar Named Desire explores the idea of an imperfect reality and how the characters are reluctant to accept the truth. Williams, portrays Blanche as an uncertain character who has come from Laurel Mississippi to live with her sister and brother-in-law in New Oleans. Blanche hides behind the veneer of outer beauty when is placed under the spotlight, fails to live up to the person she would like people to think that she is. Stella accepts her sister as she is but Stanley only wants the truth out of Blanche. The consequences of avoiding the truth prove devastating. Blanche is reluctant to accept the truth and as a result her world hinges on illusion and deception She suffers from a terrible loneliness from which she seeks to escape in inappropriate ways. When nobody is watching she consumes enough alcohol, to save her from the truth. What Blanche is like when on her own is a direct antithesis to the image she would like to portray of herself. She lives in a fantasy world to protect herself against her weaknesses and shortcomings and has dealt with her suffering by taking refuge in fanciful dreams about herself and her surroundings, 'I don't want realism I want magic... I try to give that to people. I misrepresent things to them. I don't tell the truth. I tell what ought to be truth. And if that is sinful then let me damned for it....'. Lying is her only way of enjoying a better way of life and she believes it is essentially 'harmless'.. She pays no attention to the fact that her lies, sooner or later will be found out. Blanche's lies have isolated her. Her fragility, inability to fend for herself and her self-deception has brought her to madness, "I want to deceit Mitch enough to make him want me' Blanche is very frail and puts on an act for her lover, Mitch, when she pretends to be taken with old-fashioned values. ...read more.

She indulges in this deception not only to attract Mitch, but for her own sake. Despite Blanche putting on the mask of innocence and purity, she is really a fraud who cannot stand up to the light in fear that she will be exposed for the person she really is. Blanche continually lies in order to portray herself as a true 'lady' and she feels that she must trick and deceive in order to survive in a world where she is "fading now!" and her looks are leaving her. Blanche is obsessed with beauty and terrified of how time will erode it. She lies about her age because of her vanity and she is afraid of light because in darkness she is free to fabricate and re-imagine a kinder and more beautiful world. Stella accepts Blanche as she is, however Stanley is a realist who is part of the modern world and wants the truth out of Blanche. He will not tolerate her lies and this is the reason for their antagonistic relationship. From the start of the play, the relationship between Blanche and Stanley is uneasy, Stanley is very suspicious of Blanche and says, "Look at these feathers and furs she comes here to preen herself in." Stanley sees right through her illusions, flirtations and deceptions. He wont let Blanche remake her existence and is angry with Stella for constantly waiting on Blanche's every demand. Blanche's illusions are quite fragile and Stanley deeply upsets her by hinting that he knows the truth about her when he asks if she knows a man by the name of Shaw. Blanche realises her past is catching up with her, "I'm afraid he does have me mixed up with this 'other party', The Hotel Flamingo is not the sort of establishment I would dare be seen in". Blanche is scared that Stanley may know about her reasons for leaving Belle Rieve. ...read more.

Blanche realises her past is catching up with her, "I'm afraid he does have me mixed up with this 'other party', The Hotel Flamingo is not the sort of establishment I would dare be seen in". Blanche is scared that Stanley may know about her reasons for leaving Belle Reve. Her decision to deny any knowledge of the Hotel Flamingo gives Stanley greater power. He is intimidating and strategic in his interrogation of Blanche and it is evident that she is not coping. He is ready to expose the truth about Blanche and his intention is to defeat her, saying to Stella, 'I've got the dope on your big sister', "You know she's been feeding us a pack of lies here' Stanley's words are vindictive and there is a tone of sarcastic enjoyment. He is without sympathy and now has all the evidence he needs to get rid of Blanche. His complete disregard for Blanche is heard in his claim, 'Her future is mapped out for her' His account fills in the details since the loss of Belle Reve. He becomes aggressive and his ego surfaces as he belittles Blanche, 'I've been on to you from the start! Not once did you pull any wool over my boys eyes!...I say -Ha-Ha! Do you hear me? Ha- ha-ha' The threat of violence is palpable and Stanley's cruelty is evident. He has an intention to hurt Blanche for his own pleasure, 'Come to think of it-maybe you wouldn't be bad to-interfere with...' Blanche has tragically become the victim of her own self-delusion. The consequences of Blanche's own self-delusion prove devastating. Stanley's brutality pushes Blanche over the edge and she has lost Stella and Mitch's trust and love forever. After she is sent to a mental institution, she has nothing left but her own self-delusion. She retreats to a world of fantasy that provides comfort and is preferable to the reality of her present and future and which protects her from the assaulting nature of a reality like Stanley's. Carina Rocca 11ASE draft 2 ...read more.