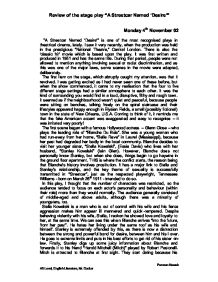 [.1]Monday 4th November 02 " "A Streetcar Named 'Desire'" is one of the most recognised plays in theatrical cinema, lately. I saw it very recently, when the production was held in the prestigious "National Theatre," Central London. There is also the 'classic hit' movie which is based upon the play. It was first written and produced in 1951 and has the same title. During that period, people were not allowed to mention anything involving s****l or r****t discrimination, and as this was one of the major laws, some scenes in the movie were adapted, deliberately. The first item on the stage, which abruptly caught my attention, was that it revolved. I was getting excited as I had never seen one of these before, but when the show commenced, it came to my realisation that the four to five different stage settings had a similar atmosphere to each other. It was the kind of surrounding you would find in a loud, disruptive, filthy and rough town. It seemed as if the neighbourhood wasn't quiet and peaceful, because people were sitting on benches, talking freely on the spiral staircase and their lifestyles appeared happy enough in Elysian Fields, a small (possibly fictional) town in the state of New Orleans, U.S.A. ...read more.

played by Robert Pastorelli. Mitch is attracted to Blanche at first sight. They start dating because his mother is sick and he wants to see her happy by marrying someone, yet Mitch is totally unaware of the dirty facts, Stanley warns him of; such as when Blanche had been a teacher in her former town, news had spread about her having an "improper" relationship with a seventeen-year old boy. This, however, may not have been true at all, but one thing was definite! Blanche had been a prostitute previously, which could be another explanation as to why she came to Elysian Fields; TO START AFRESH! As for Stella, she was the most reasonable and understandable character in "Streetcar". She is a woman who will give up anything for her husband, mainly because of the pleasurable s*x he gives her. She is forgiving to Stanley and on a personal thought, my opinion was that she was the kind of woman who loved her partner so much and tried to reconcile with Stanley, every time. She knew she could fit things into position, by showing care and loyalty to her loved one. Stella practically surrendered her life for her husband, and I admired her role, very much. Did you say Blanche? ...read more.

I think this is more than enough information, for anybody who is deciding, whether or not they should go to see this extraordinary production. Actually, if I had been asked what rating I would give it, shortly after viewing the stage play, my feedback would have been very negative, because the duration was too long and the scenes were dragged. Now that I have written so much about the characters and the storyline, it has made me realise how "A Streetcar Named 'Desire'" differs from other shows. It is NOT full of suspense (which is the reason why I have revealed and described the storyline in so much detail). It is NOT full of excitement, thrill or climax, not at all. The play is unique in its own way. Tennessee Williams, has indicated deep emotions and sentiments, which can be felt through ordinary and insane human beings. I think the themes in this review are hard to identify, unless you are prepared and know beforehand, what to expect. It is the perfect type of entertainment if you need a break, to relax and study or consider life, from various points of view. So overall, a MUST-SEE! "A STREETCAR NAMED 'DESIRE'" ACTING: 7 10 DIALOGUES: 8 10 STAGE PROPS, SETTINGS AND SPECIAL EFFECTS: 8 10 MY FINAL RATING FOR THE PERFORMANCE: 7 1/2 10!!! Page: 1 [.1] Review of the stage play "A Streetcar Named 'Desire'" Parveen Nawab AS Level, English Literature, Mr. Ducker ...read more.