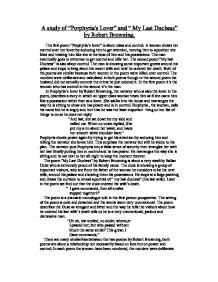 A study of "Porphyria's Lover" and " My Last Duchess" by Robert Browning. The first poem "Porphyria's lover" is about class and control. A woman shows her control over her lover by seducing him to get attention, moving him to a position she likes and treating him like she is the boss of him and his possessions. The man eventually goes to extremes to get control and kills her. The second poem "My last Duchess" is also about control. The man is showing some important guests around his palace and stops to brag about his recent wife and how he ordered her death. Both of the poems are similar because both women in the poem were killed over control. The murders were deliberate and calculated in both poems though in the second poem the husband did not actually commit the crime he just ordered it. In the first poem it's the woman who has control in the second it's the man. ...read more.

The narrator puts Porphyria into a false sense of security then strangles her with her hair finally putting him in control and he has power. He rearranges the way she is sitting and he sat next to her all night to keep the moment forever. The poem "My Last Duchess" by Robert Browning is about a very wealthy Italian Duke who is extremely proud of his family name. The duke is showing a group of important visitors, who are from the father of the woman he considers to be his next wife, around his palace and showing them his possessions. He stops at a large painting and draws the curtains to reveal a portrait of " my last duchess" (his last wife). Later in the poem we find out that the duke ordered his wife's death. " I gave commands, then all smiles stopped together!!" ...read more.

In Porphyrias lover the narrator describes the setting of the poem, it tells you about the weather, what they look like, what clothes they are wearing and it gradually sets the scene with visual detail. In my last duchess it just tells you what's happening straight away without setting the scene. This is because in my last duchess the poem is about a man showing guests around so the audience is the guests but in Porphyria's lover the reader is the audience so they need to describe everything in detail to help us imagine what it looks like as we are not there to see it. The main differences between the poems are the murders themselves in Porphyria's lover the narrator actually kills the woman but in my last duchess the Duke only gives the orders for her death and someone else physically murders her. ...read more.