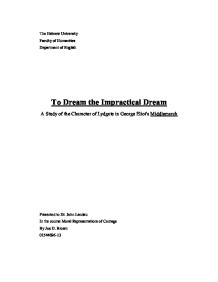 A Study of the Character of Lydgate in George Eliot's Middlemarch

The Hebrew University Faculty of Humanities Department of English To Dream the Impractical Dream A Study of the Character of Lydgate in George Eliot's Middlemarch Presented to Dr. John Landau In the course Moral Representations of Courage By Joe D. Brown 01544696-13 One of the most important aspects of defining a character as courageous in George Eliot's novel Middlemarch is self-recognition. In this novel, one of the keys to such recognition is through an understanding of one's surroundings, the environment in which that character operates. When one looks at the character of Dr. Tertius Lydgate, one discovers that, although he comes close to being considered courageous, he comes shy of the mark. I believe, and I hope this paper shall show, that Lydgate is an idealist who, unlike the protagonist of the book, Dorothea, is too much of a realist to be able to give in to one of the most material aspects of the real world - money. Another way of putting it would be to say that through the character of Lydgate, Middlemarch explores a junction of spiritual and social forces which can produce horrendous results. In Chapter 15, the text presents Lydgate as someone who "felt the growth of an intellectual passion" and as "an emotional creature, with a flesh-and-blood sense of fellowship which withstood all the abstractions of special study." This is a seemingly heroic portrait, of an aspiring scholar who maintains feelings for his fellow man. However, the text is framed by two interesting quotes. Before this portrait appears the following: "he had no more thought of representing to himself how his blood circulated than how paper served instead of gold". ...read more.

In Middlemarch, this lack of an appropriate appreciation of money is linked to a problem of understanding oneself. As Franklin says, "the falsity of romance, as in the case of Dorothea or Lydgate...arises from a dual mis-valuation. It involves an over-valuing of the other, which is tantamount to a negation of the intended partner through self-projection, and an under-valuing or negation of one's self." Thus, extending Franklin's argument, by not seeing the true value of money, you cannot see the true value of yourself. And, to compare, at the end of the novel Dorothea knows what money is worth, and can give it up in favor of Will; Farebrother is always aware that money is just a means, and not an end. Lydgate "mis-values" this tool, and thus loses sight of himself as well. In examining the way Lydgate loses this inner perspective, one must examine his relationship with Bulstrode. On the one hand, we are told that he "did not mean to imitate those philanthropic models who make a profit out of poisonous pickles to support themselves while they are exposing adulterations, or hold shares in a gambling-h**l that they may have leisure to represent the cause of public morality." (Middlemarch, p. 143) However, later in the novel, as Franklin points out, "this is a chillingly accurate description of Bulstrode, who, we discover, "won his fortune" through a speculative marriage and foul play and is attempting to absolve himself through a combination of hospital charity and self-righteous condemnations of others' lack of religious zeal (Middlemarch, Chapter 74, pp. 701-4)." And so, through the novel, Lydgate slowly moves away from the model presented by Farebrother. ...read more.

The point I wish you not to mention is the fact of disobedience to my orders. That would soon get distorted. After all, there is no evidence for me but people's opinion of me beforehand. You can only repeat my own report of myself." (Middlemarch, pp. 729-30) The way Lydgate views his courage, i.e. the way he faces himself, relies on someone else believing in him. He faces up to the reality of money not by prescribing pills and continuing his research, but by setting up a clinic for rich people in London. He gives in to the reality of money as Bulstrode and Rosamond see it, not as a tool to achieve greatness but as an end unto itself. In running away from Middlemarch, Lydgate is not brave at all. In fact, he is a coward for he avoids the future he could have had if he had thought about it in the proper terms. If he had really wanted to perform the research, he should have acquired the funds for it through prescription from the start, and not gone and wasted the money on furniture. His biggest "spot of commonness" which block his inner perspective is his own defiance of viewing his surroundings, and therefore himself as well. He wants the world to work for him, not vice versa. Unfortunately for the young physician, the "paper which serves as gold" has to be understood just as well as how the blood circulates within his body. Understanding the world without is a key for understanding the world within, and it is precisely that which Lydgate misses. And so, by "mis-valuing", as Franklin puts it, Lydgate does not dream the impossible dream, as does the Don of La Mancha, but rather only an impractical one. ...read more.