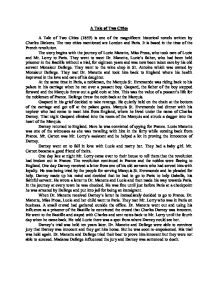 A Tale of Two Cities by Charles Dickens.

A Tale of Two Cities A Tale of Two Cities (1859) is one of the magnificent historical novels written by Charles Dickens. The two cities mentioned are London and Paris. It is based in the time of the French revolution. The story begins with the journey of Lucie Manette, Miss Pross, who took care of Lucie and Mr. Lorry to Paris. They went to meet Dr. Manette, Lucie's father, who had been held prisoner in the Bastille without a trial, for eighteen years and was now been taken care by his old servant Monsieur Defarge. They went to the wine shop in St. Antoine which was owned by Monsieur Defarge. They met Dr. Manette and took him back to England where his health improved in the love and care of his daughter. At the same time in Paris, a nobleman, the Marquis St. Evremonde was riding back to his palace in his carriage when he ran over a peasant boy. Gaspard, the father of the boy stepped forward and the Marquis threw out a gold coin at him. ...read more.

Manette and Lucie and then made his way towards Paris. In the journey at every town he was checked. He was fine until just before Paris at a checkpoint he was arrested by Defarge and put into jail for being an immigrant. When Dr. Manette received Darney's letter he immediately decided to go to France. Dr. Manette, Miss Pross, Lucie and her child went to Paris. They met Mr. Lorry who was in Paris on business. A small crowd had gathered outside the office. Dr. Manette went out and using his influence as a prisoner of the Bastille he convinced the crowd that Charles Darney was innocent. He went to the Bastille and stayed with Charles and sent notes back to Mr. Lorry until the fourth day when he came back. He told Lucie there was a spot from where Darney could see her. Darney's trial was held ten years later. Dr. Manette and Defarge were able to convince jury that Darney was innocent and they got him home. ...read more.