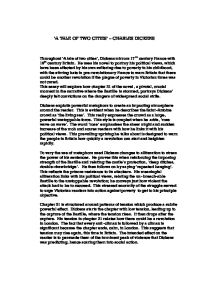 A tale of two cities

'A TALE OF TWO CITIES' - CHARLES DICKENS Throughout 'A tale of two cities', Dickens mirrors 17th century France with 19th century Britain. He uses his novel to portray his political views, which have been affected by his own suffering due to poverty in his childhood, with the stirring hate in pre-revolutionary France to warn Britain that there could be another revolution if the plague of poverty in Victorian times was not cured. This essay will explore how chapter 21 of the novel, a pivotal, crucial moment in the narrative where the Bastille is stormed, portrays Dickens' deeply felt convictions on the dangers of widespread social strife. Dickens exploits powerful metaphors to create an impacting atmosphere around the reader. ...read more.

His meaningful alliteration links with his political views, relating the un-breach-able Bastille to the unstoppable revolution; he conveys just how violent the attack had to be to succeed. This stressed enormity of the struggle served to urge Victorian readers into action against poverty to get to his principle objective. Chapter 21 is structured around patterns of tension which produce a subtle powerful effect. Dickens starts the chapter with low tension, leading up to the capture of the Bastille, where the tension rises. It then drops after the capture. His tension in chapter 21 relates how there could be a revolution in London. The fact that every anti-climax is followed by a climax is significant because the chapter ends, calm, in London. ...read more.

Having analysed Dickens' detailed linguistic and structural devices designed to create a strong impacting effect on the reader. It is clear to see that Dickens was successful in portraying his political message, that if Britain did nothing about the economic differences between poverty and wealth they would end up with another revolution just like the French. The message would not be so powerful nowadays because we are saturated with more information. In Dickens' day more people were influenced by his writing because he was one of the few good writers around. Where-as nowardays he would be competing with many other authors to get his point across. I believe his message is valid; however looking at it from a modern day perspective there is still a very large economic difference between poverty and wealth and there have been no threats for a revolution. ...read more.