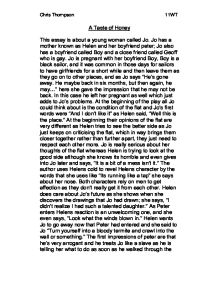 A Taste of Honey This essay is about a young woman called Jo. Jo has a mother known as Helen and her boyfriend peter; Jo also has a boyfriend called Boy and a close friend called Geoff who is gay. Jo is pregnant with her boyfriend Boy, Boy is a black sailor, and it was common in those days for sailors to have girlfriends for a short while and then leave them as they go on to other places, and as Jo says "He's gone away. He maybe back in six months, but then again, he may..." here she gave the impression that he may not be back. In this case he left her pregnant as well which just adds to Jo's problems. ...read more.

The author uses Helens cold to revel Helens character by the words that she uses like "Its running like a tap" she says about her nose. Both characters rely on men to get affection as they don't really get it from each other. Helen does care about Jo's future as she shows when she discovers the drawings that Jo had drawn; she says, "I didn't realize I had such a talented daughter." As Peter enters Helens reaction is an unwelcoming one, and she even says, "Look what the winds blown in." Helen wants Jo to go away now that Peter had entered and she said to Jo "Turn yourself into a bloody termite and crawl into the wall or something." ...read more.

Act two, scene one. Jo suspects that Geoff wants to move in as he said, "Isn't this place a bit big for one Jo?" but I think Jo wants Geoff to move in as she invites him to stay the night. Jo later denies the fact she wants marriage as Geoff asked, "You want taking in hand" an she replied with, "no, thanks" even though she's been asked. When Jo told Geoff about the baby he kept asking questions like, "how are you going to manage then" he says this to suggest that he wants to help. Jo has changed since the start of the play as she is beginning to let some of her feelings out to Geoff. When Helen came back she called the flat "the same old miserable hole" despite at the beginning of the play she said it was good. Chris Thompson 11WT ...read more.