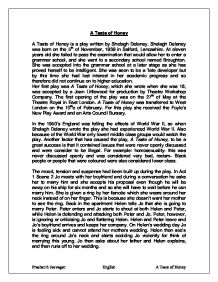 A Taste of Honey A Taste of Honey is a play written by Shelagh Delaney. Shelagh Delaney was born on the 5th of November, 1939 in Salford, Lancashire. At eleven years old she failed to pass the examination that would allow her to enter a grammar school, and she went to a secondary school named Broughton. She was accepted into the grammar school at a later stage as she has proved herself to be intelligent. She was seen to be a 'late developer but by this time she had lost interest in her academic progress and so therefore did not continue on to higher education. Her first play was A Taste of Honey, which she wrote when she was 18, was accepted by a Joan Littlewood for production by Theatre Workshop Company. The first opening of the play was on the 27th of May at the Theatre Royal in East London. A Taste of Honey was transferred to West London on the 10the of February. For this play she received the Foyle's New Play Award and an Arts Council Bursary. In the 1950's England was felling the effects of World War II, so when Shelagh Delaney wrote the play she had experienced World War II. ...read more.

It might be that Geof was thrown out because he was homosexual and he doesn't want to admit that he is gay, also in that period of time homosexuality was wrong. After Jo apologises they start talking and tell each other that they like each other and they are becoming closer and their relationship develops. There mood has changed and they are now talking about each other and asking questions about there past. Geof brings up the subject of the baby and Jo's mother, he thinks that Jo should tell her mother about her pregnancy. Jo replied 'Why?' this shows that she still doesn't think that her mother should have nothing to do with Jo's baby. Geof then goes on to ask what kind of woman is she and Jo replies by saying '...she's rich...' Geof says that she should be interested in her mother's money as she will be needing it later for the baby, as the baby will be costing Jo more money then she can afford. When Geof says that she will need baby clothes a cot and a pram, Jo replies by saying, 'I'm not planning big plans for this baby or dreaming big dreams.' This shows that Jo has thought that she will look after the baby with the barest amount of money. ...read more.

When Peter asked Helen if she's coming she replied no, however, Peter still insists that Helen come with her. I think that even when he has lost interest in Helen he doesn't want to let her go, this is just like him and his money. Helen's last act of affection is shown, she tells Geof to make sure that she goes to the clinic regularly. As soon as Helen leaves the mood has changed, it is back to that 'jokey' mood with Jo and Geof. This is shown when Geof says that at least Helen left her some money but Jo says that Peter took it back but she has a cigarette for him. Geof replies, 'Oh, smashing...' I have noted that their moods change and they are back to their original state. This scene is one of the most relevant scenes in the whole play; it shows the relationship between Jo and Geof from when it first started to when they have a strong bond. It also is the first scene with homosexuality init so this is very appealing to the audience. It also is the scene when Helen finds out that Jo is pregnant and is therefore quite dramatic. This scene is very significant to the play as without this the scene it would not be as effective. ?? ?? ?? ?? Prashanth Jeevagan English A Taste of Honey ...read more.