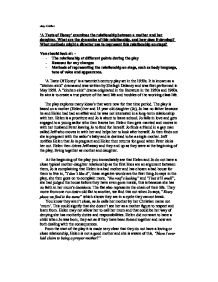 Amy Collins 'A Taste of Honey' examines the relationship between a mother and her daughter. What are the dynamics of this relationship, and how does it develop? What methods might a director use to represent this relationship on stage? You should look at: - - The relationship at different points during the play - Reasons for any changes - Methods of representing the relationship on stage, such as body language, tone of voice and appearance. 'A Taste Of Honey' is a twentieth century play set in the 1950s. It is known as a "kitchen-sink" drama and was written by Shelagh Delaney and was first performed in May 1958. A "kitchen-sink" drama originated in the literature in the 1950s and 1960s. Its aim is to create a true picture of the hard life and troubles of the working class life. The play explores many ideas's that were new for that time period. The play is based on a mother (Helen) her and 15 year old daughter (Jo), Jo has no father because he and Helen had had an affair and he was not interested in a long-term relationship with her. Helen is a prostitute and Jo is about to leave school. Jo falls in love and gets engaged to a young sailor who then leaves her. Helen then gets married and moves in with her husband Peter leaving Jo to fend for herself. Jo finds a friend in a gay man called Jeff who moves in with her and helps her to look after herself. ...read more.

When Helen leaves Jo seems to be angry with her for leaving "You've certainly never been affectionate with me." this suggests that maybe she does care for her a little or at least needs her. On the other hand she loves the idea of being independent and gets herself a job and a house. A sign that Jo misses Helen is that she asks Jeff to move in, possibly trying to replace Helen with another mother figure; Jeff does take control and care for her like a mother might do. When Helen comes back after she hears about Jo's pregnancy, they argue the same as ever but occasionally in the arguments examples that they are slightly fonder of each other appear. For example they are arguing and Jeff asks them to stop and Helen replies, "oh we enjoy it". This suggests that acting like this is just standard for them and there's no nasty agenda behind it, maybe just some regrets from both sides. I get the impression from Helen that she did want to be a good mother, but regrets that she didn't commit to it like she should have and now doesn't know how to change. When Helen returns for good it is at a point where she and Jo had left on bad terms, but she comes back as Peter asks her to leave, she assumes Jo will let her stay in her house anyway so this must mean that she has some trust in her. ...read more.

Sometimes it's Helen acting like a child staying out late and not being responsible and it's more like Jo is the mother. But then sometimes Jo is just as irresponsible as Helen, and so finds herself in exactly the same position as Helen was once in, due to be a single mother. Maybe this is why, in the end they stay together as they began because Jo experiences parts of Helen's life and begins to understand that it must have been difficult, as Jo at some points has mixed feelings about keeping her baby "I'll bash its brains out! I'll kill it! I don't want to be a mother,", Helen can now sympathise with Jo as she has been though the same thing. Amy Collins Helen is now showing her devotion to Jo by supporting her even when she finds out Jo's child will be coloured as well as illegitimate, this would have been very much looked down no in the racist 1950's society but Helen was prepared to deal with that for Jo's sake. Now she is acting more like a mother than ever. Even though Helen and Jo don't get on perfectly, deep down they do need each other, that is why they end up staying together despite all their problems. The title of the play is 'A taste of honey' and it means a little bit of sweetness in life. In the play Helen and Jo have 'A taste of honey' in their life. Helen got it from Peter. Jo got it from her sailor and Jeff. It was short-lived and they ended up right back to where they started, together. ...read more.