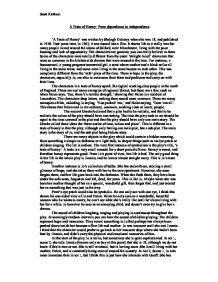 A Taste of Honey: From dependence to independence.

A Taste of Honey: From dependence to independence 'A Taste of Honey' was written by Shelagh Delaney when she was 18, and published in 1958. Four years later, in 1962, it was turned into a film. It shows life as it really was for many people in and around the slums of Salford, near Manchester, living with the poor housing and lack of opportunity. The characters are genuine; you can really believe in them. Some of the characters were totally different from the usual 'straight-laced' characters that were so common in the kitchen-sink dramas that were around at the time. For instance, a homosexual, a young pregnant unmarried girl, a semi-whore mother and a black sailor all living in the same areas, and some even living in the same houses as each other. This was completely different from the 'safe' plays of the time. There is hope in the play; the characters, especially Jo, are able to overcome their fears and problems and carry on with their lives. The characters in a taste of honey speak like typical working class people in the north of England. There are not many examples of regional dialect, but there are a few, such as when Helen says, 'Eee, there's a terrible draught,' showing that Helen is a resident of Lancashire. The characters drop letters, making them sound more common. There are many examples of this, including Jo saying, 'You packed 'em,' and Helen saying, 'Turn 'em all'. This shows that Helen and Jo are ordinary, common, working class or lower, people. ...read more.

Jo's relationship with Helen is not the usual mother-daughter relationship. It is more like a landlady-tenant relationship crossed with two relatives that don't really know or like each other but are thrown together by fate. However, in Act 1, Scene 1 (page 15) Helen gives Jo a little advice about her future, or rather she tells her, You're wasting yourself,' when Jo tells her she won't go to art school. This is the first piece of real advice Jo is given in the play. Helen acts rather motherly here, and even offers to pay for Jo to go to art school. She compliments Jo, then slips back into her old self. In the same scene, on page 16, Helen tells Peter Jo is her daughter, when you would expect her to tell him, simply, 'This is Jo.' Helen bosses Jo about, trying to get rid of her, and says, 'Turn yourself into a termite and crawl into the wall or something,' which shows Helen's affections and responsibility for Jo are easily over-ruled by her client's presence. The way Jo and Helen communicate is not like a normal mother and daughter, most noticeably Jo calling Helen by her name instead of 'mum'. Jo doesn't respect her mother, in fact she constantly criticises her for being a bad mother, 'quote,' this shows that Jo thinks she could be a better mother than Helen. They never communicate physically. Helen never hugs or touches her daughter. Jo criticises Helen rather a lot in the play, 'You always have to rush off into things. ...read more.

Jo behaves towards Geof as a friend at the start, joking with him but getting on really well. As she gets to know him better she realises how nice he is and useful to have around. She even lets him live with her. Jo starts to mature, and she values Geof and his help more. She begins to face the reality that her baby is due, and tells Geof she wishes Helen was there. She remembers the time she spent with Jimmie. She says to Geof, 'I always want to have you with me because I know you'll never ask anything from me.' This may indicate that Jo doesn't fully appreciate all that Geof has done for her, or that she cannot be completely serious about how she feels about Geof. I don't think Jo is ready for motherhood, as she has never really experienced any motherly actions herself, and has never grown up around children. Now though, Jo has her own flat, and says she is perfectly capable of working and looking after the baby. I think that Jo has matured to the extent that she accepts that she is having a baby, and she accepts that she needs people to help her. It is because of this that Jo will never be fully independent, although she has become more independent by living on her own and being without her mother. Jo has never been fully dependent, except maybe when she was a tiny baby. Although I think she is more independent than dependent, Jo will never be completely independent either, especially as now she is having the baby, and will need people around her to help her through it. Sarah Kirkham ...read more.