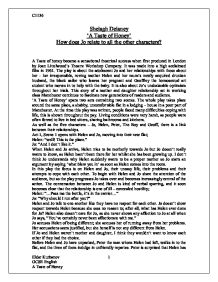 'A Taste of Honey'How does Jo relate to all the other characters? A Taste of honey became a sensational theatrical success when first produced in London by Joan Littelwood's Theatre Workshop Company.

Shelagh Delaney 'A Taste of Honey' How does Jo relate to all the other characters? A Taste of honey became a sensational theatrical success when first produced in London by Joan Littelwood's Theatre Workshop Company. It was made into a high acclaimed film in 1961. The play is about the adolescent Jo and her relationships with those about her - her irresponsible, roving mother Helen and her mum's newly acquired drunken husband, the black sailor who leaves her pregnant and Geoffrey the homosexual art student who moves in to help with the baby. It is also about Jo's unshakeable optimism throughout her trials. This story of a mother and daughter relationship set in working class Manchester continues to fascinate new generations of readers and audience. 'A Taste of Honey' spans two acts containing two scenes. The whole play takes place around the same place, a shabby, uncomfortable flat in a lodging - house in a poor part of Manchester. At the time this play was written, people faced many difficulties coping with life, this is shown throughout the pay. ...read more.

Her accusations seem justified, but she herself is not any different from Helen. If Jo and Helen weren't mother and daughter, I think they wouldn't want to know each other if they had the choice. Before Helen and Jo have unpacked, Peter the man whom Helen had left, walks in to the flat, and the three of them indulge in unfriendly repartee. Peter is surprised that Helen has a daughter, and Jo responds to his lack of interest in her by attempting to damage her relationship with Helen. Peter leaves, and the scene ends with Helen and Jo. Act I Scene II contains imagery of romance and happiness, as we meet Jo's boyfriend, a black youth who is doing his national service in the navy and who's name is not given until the end of the play. Jo and the boy are left alone in the flat, whilst Helen has gone away with Peter. The conversation between Jo and the boy reveals that their relationship is based on flirtation, rather than knowledge or real love. The boy's sexual interest in Jo is over but his attitude is casual, and Jo's claim that she loves him is unverified by the conversation between them. ...read more.

In Act II, Scene II, a few months have passed, and Jo is heavily pregnant. She and Geoff continue their usual partnership, with Geoff making efforts to improve their life styles, and Jo waiting for the birth of her baby. Geoff tries to help Jo by buying her a baby doll, so that she can become familiar to how to treat the baby when it arrives, but the baby doll is white, not black, this triggers an emotional outburst from Jo. She insists that she does not want the baby, and that she will kill it when it is born, although this is the only act of hostility towards the baby, it suggests that Jo is not that much different from her mother as she might like to be. Helen returns to the flat, having left Peter, who has apparently left her for another woman. As soon as Helen moves in with Jo and Geoff, it isn't long before Helen drives Geoff back out into the streets. Helens caring attitude towards Jo disappears when Jo tells her that her child's father was black. Helen leaves the flat after the shocking news, and Jo is left alone, not knowing that Geoff isn't coming back. ?? ?? ?? ?? C1136 1 Eldar Kurbanov GCSE English A Taste of Honey ...read more.