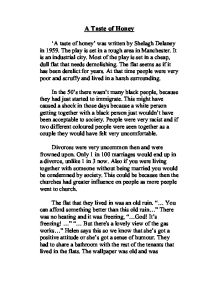 'A taste of honey' written by Shelagh Delaney in 1959.

A Taste of Honey 'A taste of honey' was written by Shelagh Delaney in 1959. The play is set in a rough area in Manchester. It is an industrial city. Most of the play is set in a cheap, dull flat that needs demolishing. The flat seems as if it has been derelict for years. At that time people were very poor and scruffy and lived in a harsh surrounding. In the 50's there wasn't many black people, because they had just started to immigrate. This might have caused a shock in those days because a white person getting together with a black person just wouldn't have been acceptable to society. People were very racist and if two different coloured people were seen together as a couple they would have felt very uncomfortable. Divorces were very uncommon then and were frowned upon. Only 1 in 100 marriages would end up in a divorce, unlike 1 in 3 now. Also if you were living together with someone without being married you would be condemned by society. ...read more.

The audience also know that they aren't wealthy because of the place they are moving into. When Jo is wrapping her scarf round the light bulb, there should be an electrical buzz sound so that she burns herself and the audience feel sorry for her. "...Christ it's hot..." When Jo is turning the gas stove on she doesn't know which knob to turn, so she turns all of them and there's a loud bang which shakes the audience a bit. With all these incidents happening, shows that nothing is going right for Jo. Helen is a very self-centred character. She only thinks about herself most of the time. Although we know she does care about Jo when she says, "... have you never thought of going to a proper art school..." "... ill pay for it..." this could also show that she doesn't want Jo to spoil her life like she's spoilt her own. Helens problem is that she makes decisions without thinking who else it will affect or who she might loose. ...read more.

The audience probably doesn't trust peter when he comes on. Peter acts as if he cares for Helen and that he's known her for a long time. "...Your nose is damp. Here. Has this..." He thinks that he's in love, but probably doesn't know the meaning of it. He says that he's been missing and that hes been looking for her everywhere "...had to chase all over town looking for you..." I don't think he's looked for her everywhere. He's just saying that to make Helen feel that he really is missing. Peter brings Helen a bouquet of flowers, probably so she doesnt change her mind about getting married. He also buys Jo some chocolates so she stays quiet. "...buying my silence hey..." Jo does fall for it and stays quiet. This also might show the audience that helen and peter are definetely going to get married because Jo aint no longern in the way. I think that 'A Taste of Honey' is a kitchen sink drama because it is set in poor surroundings, most of the play is set in one room, it contains conflicts and arguments and everyday language. It also might reflect the lives that people use to live in the 1950's. CHUTY ...read more.