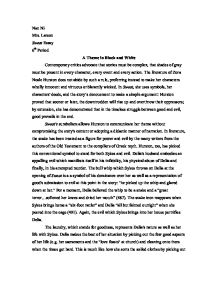 A Theme in Black and White.

Nan Ni Mrs. Larson Sweat Essay 6th Period A Theme in Black and White Contemporary critics advocate that stories must be complex, that shades of gray must be present in every character, every event and every action. The literature of Zora Neale Hurston does not abide by such a rule, preferring instead to make her characters wholly innocent and virtuous or blatantly wicked. In Sweat, she uses symbols, her characters' deeds, and the story's denouement to make a simple argument: Hurston proved that sooner or later, the downtrodden will rise up and overthrow their oppressors; by extension, she has demonstrated that in the timeless struggle between good and evil, good prevails in the end. Sweat's sumbolism allows Hurston to communicate her theme without compromising the story's content or adopting a didactic manner of narration. In literature, the snake has been treated as a figure for power and evil by the many writers from the authors of the Old Testement to the compliers of Greek myth. ...read more.

This is much like how she sorts the soiled clothes by picking out the white things, then resorting the pile when Sykes "kick[s] all of the clothes together again" (487). For fifteen years, Sykes has dirtied her life, and she has washed it clean time after time. However, the oppressed will remain so as long as they can bear it, but every person has a breaking point, and Delia is no exception. It may seem like the story's climax embodies a sudden change in Delia's character; in actuality, her willful failure to help him was a manisfestation of the courage she built up slowly over the course of fifteen years of brutality. During the first year of marriage, she was able to develop "a triumphant indifference to all that he was or did," and later, she built a "spiritual earthworks" against Sykes (488). In the story, she also verbally attacks her husband for the first time: "Lay 'roun' wid dat 'oman all yuh wants tuh, but gwan 'way fum me an' mah house. ...read more.

There lay the snake in the basket!" Initially filled with terror, Delia fled and climbed into the hay barn. But soon, her fear dissolved into something much more dangerous: she began to think coherently and as she cogitates, a "cold, bloody rage" stalked through her. Eventually, an "awful calm" came over her and she knew what she must do. "'Well, Ah done de bes' Ah could. If things aint right, Gawd knows taint mah fault'" (p.493). When the snake bites Sykes, she hears a "series of animal screams" but she "never moved, he called, and the sun kept rising" (p. 494). By the story's end, Delia, the personification of innate goodness, has overcome oppression. When she lets the snake destroy Sykes, she vanquishes evil by pitting it against itself. The last symbol Zora Neale Hurston employs is the rigid, straight Chinaberry tree, which stands in contrast to the sinuous snake of evil. At the fall of the curtian, Delia is clinging onto its trunk, where she waits for the cold river to rise and "extinguish that eye which must know by now that she knew." Sykes dies knowing that he is no longer the oppressor and once again, evil is defeated. ...read more.