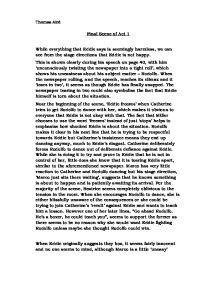 A view from the Bridge analysis. Final Scene of Act 1

Final Scene of Act 1 While everything that Eddie says is seemingly harmless, we can see from the stage directions that Eddie is not happy. This is shown clearly during his speech on page 40, with him 'unconsciously twisting the newspaper into a tight roll', which shows his uneasiness about his subject matter - Rodolfo. When the newspaper rolling, and the speech, reaches its climax and it 'tears in two', it seems as though Eddie has finally snapped. The newspaper tearing in two could also symbolise the fact that Eddie himself is torn about the situation. Near the beginning of the scene, 'Eddie freezes' when Catherine tries to get Rodolfo to dance with her, which makes it obvious to everyone that Eddie is not okay with that. ...read more.

For the majority of the scene, Beatrice seems completely oblivious to the tension in the room. When she encourages Rodolfo to dance, she is either blissfully unaware of the consequences or she could be trying to join Catherine's 'revolt' against Eddie and wants to teach him a lesson. However one of her later lines, "Go ahead Rodolfo. He's a boxer, he could teach you", seems to support the former as there seems to be no reason why she would want Eddie fighting Rodolfo unless maybe she thought Rodolfo could win. When Eddie originally suggests they box, it seems fairly innocent and no one seems to mind, although Marco is a little 'uneasy' about the idea; however underneath, Eddie could be trying to prove to everyone that Rodolfo is not a real man. ...read more.

By lifting the chair over his head, Marco demoralises Eddie in a number of ways; Marco has ultimately proven that he is stronger and more powerful than Eddie in front of his entire family, which could be seen as a foreshadowing of the scene later in the play when Marco disrespects Eddie in front of the entire neighbourhood. Marco could also be seen to threatening Eddie and the text supports this, saying 'the chair raised like a weapon over Eddie's head' implying that if Eddie hurts Marco again, he might do something to Eddie. Having the final shot of the act as Marco raising a chair over Eddie's head as though he is about to hit him helps create an escalated sense of drama. ?? ?? ?? ?? Thomas Aird ...read more.