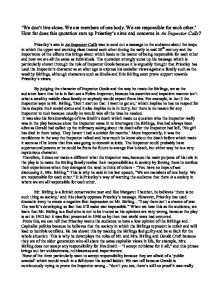 We dont live alone. We are members of one body. We are responsible for each other. How far does this quotation sum up Priestleys aims and concerns in An Inspector Calls?

'We don't live alone. We are members of one body. We are responsible for each other.' How far does this quotation sum up Priestley's aims and concerns in An Inspector Calls? Priestley's aim in An Inspector Calls was to send out a message to the audience about the ways in which the upper and working class treated each other during the early to mid 20th century and the importance of the effects this brings about which leads to the matter of being responsible for each other and how we are all the same as individuals. The quotation strongly sums up his message which is particularly shown through the role of Inspector Goole because it is arguably thought that Priestley has used the Inspector's character as an alter ego to express his socialist views against a family such as the wealthy Birlings, although characters such as Sheila and Eric Birling soon prove support towards Priestley's views. By judging the character of Inspector Goole and the way he treats the Birlings, we as the audience learn that he is in fact not a Police Inspector, because his assertive and impatient manner isn't what a wealthy middle class family or anybody would expect from him. For example, in Act 3 the Inspector says to Mr. Birling, 'Don't start on that. I want to get on,' which implies he has no respect for them despite their social status and it also implies he is in hurry, but there is no reason for any Inspector to rush because usually he would take all the time he needed. ...read more.

He has shown this by making the Birlings feel guilty and be at fault for the whole situation. This is why he downplays the roles of Mr. and Mrs. Birling and Gerald Croft because they are of the older generation who all share the same capitalist views in life, for example, Mrs. Birling does not accept any responsibility for Eva Smith - "I accept no blame for it all," and this phrase brings out her stubbornness, ruthlessness and impertinence. None of the three particularly want to accept responsibility because they are afraid of a 'public scandal' which would result in a fall down the social ladder. We can tell because Gerald is continuously trying to prove the Inspector wrong - "don't you see, there's still no proof it was really the same girl. How do we know she was really Eva Smith or Daisy Renton?" Then Mr. and Mrs. Birling agree and so they continue to find reasons to back him up - "The whole damned thing can have been a piece of bluff." These phrases represent how after the Inspector's presence, they still have not learnt anything which gives an even more negative response from the audience because it shows they are so blinded by the wealthy life they live in. However, as the audience we can try to view them as 'members of one body,' because the Birlings are only classified as people in the upper class since they are wealthy and this is what concerns Priestley because ...read more.

near the end of the play where Sheila talks back against her parents and takes back the respect she has given them - "I'm not being childish. If you want to know, it's you two who are being childish - trying not to face the facts." Like the Inspector, Sheila repeatedly reminds her family how they are responsible for people like Eva Smith - "Between us we drove that girl to commit suicide/ But that won't bring Eva Smith back to life will it?" Priestley was a supporter of the Labour party, and he frequently made broadcasts on the radio about the merits of socialism which we can see are strongly reflected in this play. We can tell that Priestley's concerns come across via the role of the Inspector because they both have the same point of view which is why the quotation 'We don't live alone. We are members of one body. We are responsible for each other,' sums up his message. He does not tell us who the Inspector is but I believe Priestley did this intently so that the audience could be the judge and reach their own conclusions about his identity. He has proved it possible through characters such as Sheila Birling that people can change to fit in. Priestley's concerns are even relevant in today's society where there are still people who need to be aware of their behaviour towards others around them which therefore, is concluded by the quotation from the Inspector's last speech. ...read more.