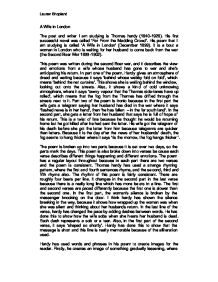 A wife in london

A Wife in London The poet and writer I am studying is Thomas hardy (1840-1928). His first successful novel was called 'Far From the Madding Crowd'. His poem that I am studying is called 'A Wife in London' (December 1899). It is a bout a woman in London who is waiting for her husband to come back from the war (the Second Boer War 1899-1902). This poem was written during the second Boer war, and it describes the view and emotions from a wife whose husband has gone to war and she's anticipating his return. In part one of the poem, Hardy gives an atmosphere of dread and waiting because it says 'behind whose webby fold on fold', which means 'behind the net curtains'. This shows she is waiting behind the window, looking out onto the streets. Also, it shows a kind of cold unknowing atmosphere, where it says 'tawny vapour that the Thames side-lanes have up rolled', which means that the fog from the Thames has drifted through the streets next to it. ...read more.

This poem is also broke down into verses because each verse describes different things happening and different emotions. The poem has a regular layout throughout because in each part there are two verses and the poem is consistent. Thomas hardy has used a strange rhyming pattern, where the first and fourth sentences rhyme, and the second, third and fifth rhyme also. The rhythm of this poem is fairly consistent. There are roughly four beats per line. It changes in the second part in the last verse because there is a really long line which has more beats in a line. The first and second verses are paced differently because the first one is slower than the second one. In the first part, the woman's silence is broken by the messenger knocking on the door. I think hardy has shown the silence breaking in the way, because it shows how wrapped up the woman was when she was silent and thinking about her husbands return. ...read more.

This shows that everything seems bitterer to the woman now because she is grieving over the loss of her beloved husband. The fog seems to be thicker to the woman because she is feeling miserable and the fog reflects her mood back to her and she notices it more. Also, in the second part it says 'his hand, whom the worm now knows'. This shows that her husband is dead and buried because his hand knows the worm, because of the earthworms where he is buried. In this poem, I think Hardy was trying to create an image of waiting, sorrow, and grief. He has included many sentences such as 'like a waning taper' which shows something is gradually lessening and taking a long time. These words also sound like something painful because the word waning sounds like wailing. Hardy's intentions were to shows the sorrow and cold waiting of people who were left behind during the Boer war while their loved ones went to war and died. He did achieve these intentions because I felt empathy for the wife who was waiting for her husband Lauren Shopland ...read more.